De Minaur ousted in US Open opening round

World No.17 Alex de Minaur has lost to American Taylor Fritz in the opening round of the US Open. 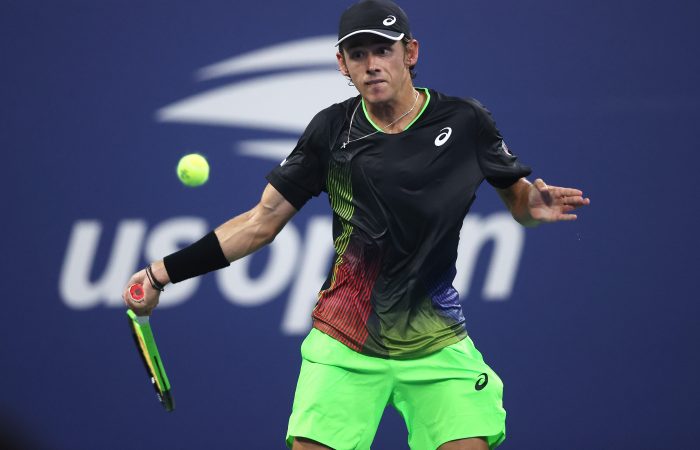 Australia’s top-ranked man Alex de Minaur has been knocked out of the US Open, with American Taylor Fritz recording a 7-6(4) 6-2 1-6 6-4 victory in their first-round match today.

Fritz is one of the highest-ranked unseeded players in the men’s singles draw and the world No.41 proved why he is dangerous, firing 42 winners to De Minaur’s 37 in their three-hour clash.

The spirited De Minaur kept trying to find a way. The 22-year-old Australian fought back to win the third set, giving himself a glimmer of hope as he looked to stage his first ever comeback from a two-sets-to-love deficit.

Little separated the pair in a tight fourth set, until Fritz struck in the 10th game.

The Australian bravely saved one match point with a forehand winner. But he couldn’t save a second, with 23-year-old Fritz breaking to record his first top-20 win at a major tournament.

It is De Minaur’s first loss to Fritz, having never lost a set in their four previous meetings.

The result leaves Jordan Thompson as the last Australian standing in the top half of the men’s singles draw. The world No.59 progressed to the second round after winning a fiercely-contested five-set battle with Italy’s Gianluca Mager earlier today.

Wildcard Max Purcell’s main draw debut ended with a loss to world No.16 Jannik Sinner – however, the 23-year-old Australian gallantly pushed the Italian to four sets in their first-round clash.

However, Sam Stosur’s 16th US Open campaign ended with a loss to world No.28 Anett Kontaveit and wildcard Storm Sanders was beaten by Japan’s Misaki Doi.