Australia's top-ranked women, Ash Barty and Ajla Tomljanovic, have both advanced to the second round at the US Open. 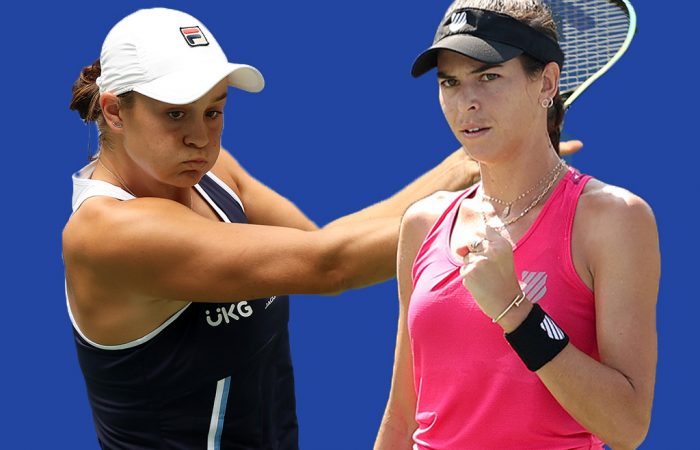 Australians Ash Barty and Ajla Tomljanovic have both scored impressive first-round victories at the US Open.

“Certainly happy to be through and to be playing again here in New York,” said Barty, who missed last year’s tournament.

The world No.1 was in complete control early in her first-career meeting with the 36-year-old Russian, confidently dictating play and hitting 13 winners to two in the opening set.

Play was briefly delayed mid-way through the second set due to a technical issue with the electronic line-calling system, with world No.101 Zvonareva leading 3-2 on serve at the time.

Yet nothing could stop Barty’s momentum, with the 25-year-old returning to win three of the next four games and setting up a chance to serve for the match.

Former world No.2 Zvonareva kept fighting though, breaking Barty’s serve to keep the pressure on the top seed.

But the two-time major champion calmly survived the challenge, saving a set point in a tightly-contested second-set tiebreak to eventually close out victory after one hour and 28 minutes on court.

“It got really tense in that second set,” Barty admitted. “I think in those bigger moments in the second set I was able to be aggressive and trust myself – and that was a massive thing today.”

Barty, who is the first top-seeded Australian in a US Open women’s singles draw in 51 years, finished the match with 11 aces and 31 winners.

The result improves Barty’s season record to 41 wins from 48 matches – and also extends her winning streak in Grand Slam first-round matches to 13.

Her second-round opponent is 18-year-old Clara Tauson of Denmark, a former world No.1 junior who is currently ranked No.78 and making her US Open debut.

Meanwhile, Tomljanovic needed only 63 minutes to dismiss 19-year-old American wildcard Katie Volynets 6-3 6-1 in the opening round.

The 28-year-old Australian struck 14 winners and conceded just nine points on serve against the world No.197 to match her career-best result in New York.

It is the fifth time, from eight appearances, that Tomljanovic has reached the second round at the tournament.

To advance to the third round for a first time, the world No.46 will need to beat Croatian Petra Martic. The world No.32 has won both of her previous matches against Tomljanovic, however they last played a decade ago in qualifying at Australian Open 2011.

Sam Stosur’s 10-year anniversary celebrations of her US Open 2011 triumph were spoiled by Estonia’s Anett Kontaveit. The world No.28 scored a 6-3 6-0 win against the 37-year-old Australian.

There was better news for Jordan Thompson, who won a five-set battle against Italy’s Gianluca Mager.