Dylan Alcott and Heath Davidson will compete for a second quad wheelchair doubles Paralympics gold medal after advancing to the final in Tokyo. 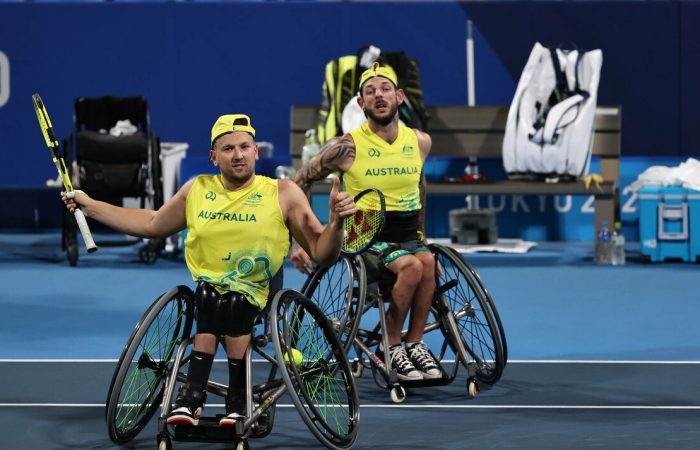 Dylan Alcott and Heath Davidson are on track to defend the gold medal they claimed at the Rio Paralympics five years ago after advancing to the quad wheelchair doubles final in Tokyo.

Alcott and Davidson defeated Mitsuteru Moroishi and Koji Sugeno 6-2 6-4 and will now face the Netherlands’ Sam Schroder and Neils Vink in the gold medal match on Wednesday.

“(It’s) awesome to get to a gold medal match with one of your best mates – it’s incredible,” said Alcott.

Despite the straight-sets scoreline, it was a tight encounter for the top-seeded Australians, who led 6-2 3-0 before Moroishi and Sugeno staged a second-set challenge.

“We got a bit nervous, a tight in the second but they played awesome,” said Alcott. “I guess we were maybe lucky there wasn’t a home crowd there for a bit, because when they were rallying in that second set it was pretty dangerous.

Davidson was grateful to be competing alongside Alcott after the second-set battle, which extended for 51 minutes.

“He’s got big shoulders, so threw me on his back and carried me for half of it,” said the 34-year-old. “But we came good in the end, that’s the main thing. Just really, really fortunate and grateful that we get a chance to play on Wednesday.”

Alcott and Davidson are also working hard in singles, with both advancing to the quarterfinals.

Davidson today faces No.2 seed Schroder in the first match on Court 6 at Arieke Tennis Park.