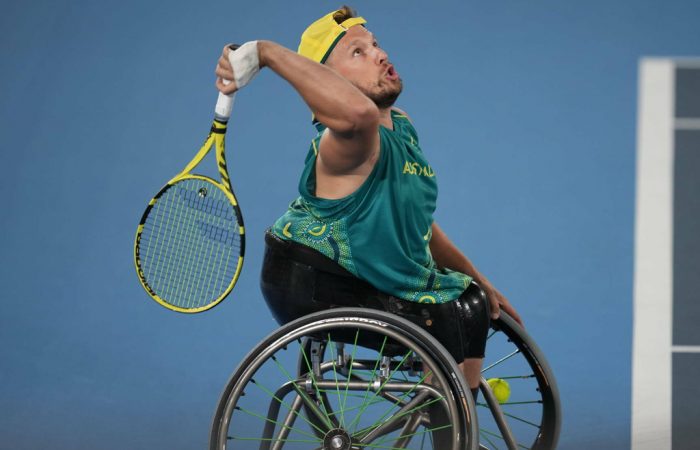 A fourth Paralympic Games gold medal is edging ever closer for world No.1 Dylan Alcott, who took just 55 minutes to secure his place in the quad wheelchair singles semifinals.

The defending singles gold medallist in Tokyo, Alcott was near perfect as he overcame the 47-year-old American at Arieke Tennis Park.

Barten claimed his lone game as Alcott served at 4-0 in the second set, when the top-seeded Australian allowed Barten an opening with two double faults. They were among only four from Alcott in the entire match.

“I’m happy just to get through unscathed so the trick is to try and get through as quick as you can in the later rounds. To try and conserve energy, so I’ve done that now,” he said.

The Paralympics are a successful setting for Alcott, who earlier thrived as a member of the Australian Rollers basketball team. He won basketball gold at the Beijing Paralympics in 2008 and silver in in London in 2012 before successfully turning his attention to tennis.

But Alcott admits it will be a tough singles semifinal against 18-year-old Vink, who has made fast progress to world No.4.

“I’ve got a massive test in the semifinals against Niels Vink, who’s probably the hottest player in the world at the moment … it’s going to be a massive battle but I’m really looking forward to it,” said the Australian, who points to Vink’s movement and mentality as his greatest strengths.

“It’s a really tough draw for me – that’s what I wanted. I wanted to beat everybody, play the best in the world to try and get that gold medal and all I can do is try and do my best and hopefully it’s good enough.”

Alcott is also aiming to defend his quad wheelchair doubles gold medal, after progressing to the final with his close friend Heath Davidson.

Davidson will have added motivation against Schroder, after exiting to the No.2 seed in the singles quarterfinals today. Schroder took just over an hour to claim his 6-2 6-1 win.

“I stuck to my guns, I stuck to the plan that we put in place. I think I played reasonably well but he gave me a touch-up out there,” said Davidson, who admitted that his go-for-everything style was no match for Schroder’s all-round dominance.

“He gave me no time. I thought I served really well but he was hitting the ball back harder. Props to the guy – he’s No.2 in the world, he deserves to be there.”

Davidson was far from discouraged by his progress to the quarterfinals. “I’ve just got to continue working on my game and I’m still going to go out there every time and compete and hopefully I can give him a few more tough matches along the way,” he said.

Davidson will hope to do so in the doubles final alongside Alcott on Wednesday. “We’ve had some really ripper matches over the past couple of years,” said Davidson.

“I feel like I’m hitting good strokes, I feel like I’m pushing well. We’ve got to give it our best go. I enjoy playing doubles a little bit more, I love being out there with Dyl’.

“Hopefully we can do what we we’ve been working on and that speaks for itself.”