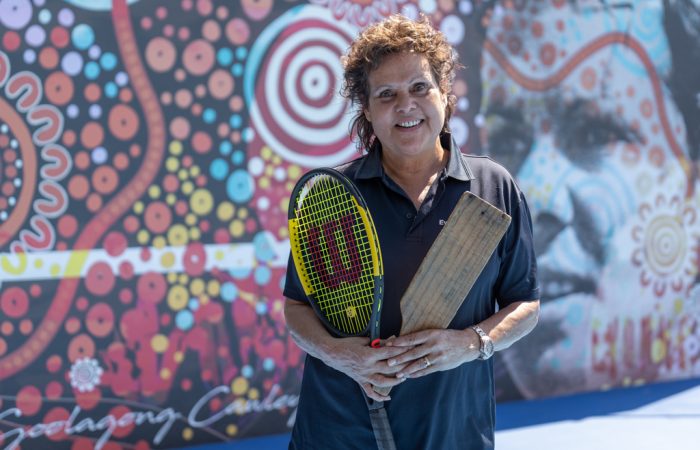 Paink is also creating a striking mural of current world No.1’s Ash Barty and Dylan Alcott as part of Victoria’s Hitting Wall project, which will be completed soon at Dendy Park in Melbourne’s south.

The national project will also see a wall redesigned by local artists in every state and territory over the coming months.

“With more than 450 hitting walls at affiliated venues and clubs across Australia, and hundreds more in community parks and public settings, hitting against a wall is a great way for people of all ages to have fun, stay active and improve their tennis skills,” Tennis Australia Chief Tennis and Members Officer Tom Larner said.

“Tennis has hit record participation milestones over the past 12 months and this initiative is yet another way to further galvanise potential players of all ages to pick up a racquet and have a hit.

“With the engaging and eye-catching artwork featuring some of our best known players, it’s also an opportunity to reflect on the journey of so many of our tennis greats, most of whom spent hours honing their craft against one of their fiercest opponents – the hitting wall,” Larner continued.

Wiradjuri woman Evonne Goolagong Cawley’s spectacular tennis career famously started in humble surrounds, when as a young girl she hit tennis balls against a wall in her backyard using a wooden bat her father crafted from an apple crate.

“My dream started when I first started playing tennis by hitting balls against walls, houses, water tanks, any wall, even before I saw a tennis court, “Goolagong Cawley reflected recently.

“When I moved to Barellan (in regional NSW), we actually lived behind the tennis club and so that was the first time I saw tennis courts, but I still kept hitting against the wall.

“I used to see how many times I could hit the ball against the wall, one bounce without making a mistake, then write the highest score in the dirt, then come back the next day and try and beat that score. And that’s how I got better and better each day.

“When I was about eight, I read this cartoon called Princess Magazine, with a story about a young girl who was found, trained and taken to this place called Wimbledon, where she played on this magical centre court. And she won and I didn’t even know Wimbledon existed.

“From then on, every time I hit the ball against the wall, I used to pretend I was at Wimbledon, and that’s how my dream started… And then I dreamt about it every night,” Goolagong Cawley recalled.

Most recently, Evonne’s legacy was shared by friend Ash Barty who wore a dress at Wimbledon in honour of Evonne’s win 50 years ago. Evonne recalled texting her prior to the Wimbledon final with the message, “Dreams do come true, and it will come true for you.”