Australia has seven representatives in the men's singles draw at this year's US Open. 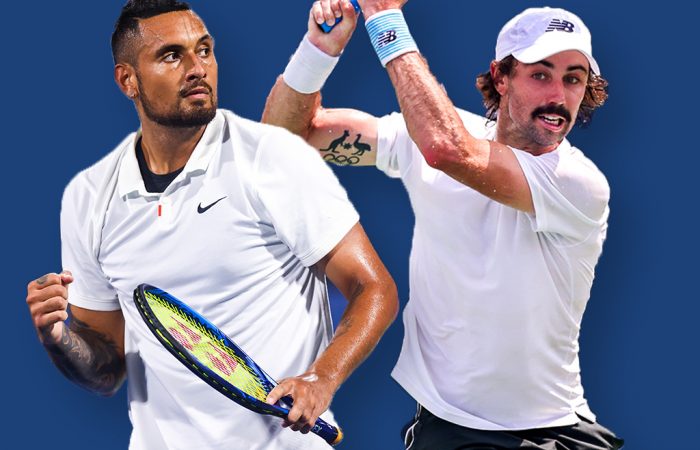 The final Grand Slam tournament of the year begins in New York this week and we have seven Australian players competing in the men’s singles draw. It matches the most representatives we have had since eight men contested the 2015 event.

Hewitt, who is now Australia’s Davis Cup captain, believes Alex de Minaur and Alexei Popyrin are ones to watch this year.

“The US Open surface suits his game,” says Hewitt of De Minaur, while noting Popyrin “has got the weapons to play well”.

[14] Alex de Minaur, 22, New South Wales
Last year’s US Open proved a major breakthrough for De Minaur, advancing to his first Grand Slam quarterfinal. It took eventual champion Dominic Thiem to stop his winning run. The world No.17 has won two ATP titles so far this season and achieved a new career-high ranking, but at times, has struggled with consistency. He has only won one of his past five matches and is still rebuilding his form after contracting COVID-19 last month. One thing is certain, De Minaur will give it is all in his fifth US Open appearance. He faces world No.41 Taylor Fritz in the opening round. The 23-year-old American won the US Open 2015 boys’ singles title and has been ranked as high as No.24.
US Open career record: 9-4
US Open best result: Quarterfinals 2020

John Millman, 32, Queensland
Millman enjoyed a career-best run at the US Open in 2018, memorably reaching the quarterfinals. His stunning performance included a first top-10 win against five-time champion Roger Federer in the fourth round. Handling New York’s humid conditions is not a concern for the world No.43, however he makes his seventh consecutive US Open appearance under an injury cloud due to a foot injury. Millman, who has withdrawn from this past two tournaments, plays Swiss qualifier Henri Laaksonen in the opening round. He has played the world No.130 once before – beating him in an ATP Challenger match in Australia in 2012.
US Open career record: 7-6
US Open best result: Quarterfinals 2018

Jordan Thompson, 27, New South Wales
Thompson makes his sixth US Open appearance in impressive form. The hard-working world No.59 has won 15 of his past 22 matches and made four tour-level quarterfinals since June. Thompson can also take confidence from a career-best Grand Slam run at last year’s US Open, where he made the fourth round. Thompson is a former US Open finalist too, reaching the boys’ doubles final with Nick Kyrgios in 2012. He plays 26-year-old Italian Gianluca Mager in the opening round. It is his second meeting with the world No.70, with Thompson winning a three-set battle when they played during the Melbourne Summer Series earlier this year.
US Open career record: 5-5
US Open best result: Fourth round 2020

James Duckworth, 29, New South Wales
Perseverance continues to pay off for Duckworth, who is currently at a career-high ranking of No.67. He made his first Grand Slam third round appearance at Wimbledon this year and defeated world No.15 Jannik Sinner in Toronto earlier this month. Making his sixth US Open main draw appearance, Duckworth hopes to improve a 1-5 win-loss record at the tournament. After overcoming eight surgeries in the past five years, no challenge is too big for the determined Australian. He faces world No.73 Pedro Martinez in the opening round. The 24-year-old Spaniard is at a career-high ranking too and aiming to win his first main draw match in New York.
US Open career record: 1-5
US Open best result: Second round 2016

Alexei Popyrin, 22, New South Wales
The world No.71 is making only his second US Open main draw appearance, after opting not to compete last year due to the COVID-19 pandemic. The 196-centimetre Australian made the third round in his 2019 debut. Popyrin made a promising start to the 2021 season, winning his first ATP singles title in February and making his top-70 debut. However, has been struggling in recent weeks. After recording only two wins from 13 matches, he bounced back to win three consecutive matches and reach the Winston-Salem second round as a qualifier this week. That effort provides an important confidence boost ahead of a first-round clash with world No.108 Radu Albot.
US Open career record: 2-1
US Open best result: Third round 2019

Nick Kyrgios, 26, ACT
Kyrgios has slipped to world No.85 in the rankings, his lowest mark in seven years. However, the always-dangerous Australian is still a name every player in the draw will be hoping to avoid. He thrives performing on the sport’s biggest stages and is tough to beat, especially when his serve is firing. Since returning to the tour in June, Kyrgios has built a 3-4 win-loss record. Is New York where he can build some much-needed momentum? He has a tough first-round assignment against world No.21 Roberto Bautista Agut, who has a 13-8 career record at the tournament. He has split results with the 33-year-old Spaniard in their two previous meetings.
US Open career record: 8-7
US Open best result: Third round 2014, 2016, 2018, 2019

[WC] Max Purcell, 23, New South Wales
The world No.205 makes his main draw debut in New York after being rewarded with a wildcard for his recent impressive form. Purcell has won 13 of his past 20 matches, which includes two top-20 victories. He defeated US Open 2017 finalist Kevin Anderson and world No.16 Gael Monfils during a semifinal run at Eastbourne and upset world No.15 Felix Auger-Aliassime at the Olympic Games. This is Purcell’s second Grand Slam singles main draw appearance and first since he qualified at Australian Open 2020. “I’m really excited,” Purcell says. He faces another top-20 challenge in the first round, pitted against world No.16 Jannik Sinner of Italy.
US Open career record: 0-0
US Open best result: Qualifying second round 2018