Australian duo Ellen Perez and Sam Stosur have lost in the quarterfinals of the women's doubles competition at the Tokyo 2020 Olympic Games. 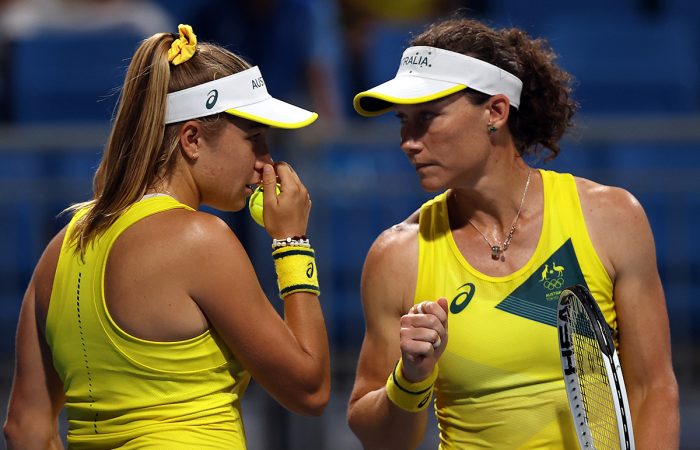 The Australian tennis team created history in the women’s doubles competition at Tokyo 2020, with two pairs advancing to the quarterfinals for the first time.

However, their hopes of claiming a first medal since Rachel McQuillan and Nicole Bradtke’s bronze-winning campaign in 1992 have been dashed.

Bencic and Golubic are proving a formidable team. They defeated Japanese hopes and No.2 seeds Shuko Aoyama and Ena Shibahara in the opening round, then saved a match point yesterday in a second-round win against Spanish duo Garbine Muguruza and Carla Suarez Navarro.

The Swiss pair made a strong start in their quarterfinal today against Stosur and Perez, racing to a 5-2 lead.

Stosur dutifully held to love in the following game to keep Australia’s chances alive in the opening set. But in the in-form Bencic, who has also advanced to the singles semifinals this week, stepped up and held serve to love to secure the opening set for Switzerland in 42 minutes.

Securing a break early in the second set, Bencic and Golubic kept the pressure on the Australians as they edged ahead 3-1.

From there, the Swiss combination maintained their lead and closed out victory in 83 minutes.

It ends a career-best Olympics run for both 37-year-old Stosur and 25-year-old Perez. After entering the Olympics with a 0-3 win-loss record as a team, they won two hard-fought matches to advance to the quarterfinals.

Stosur also made individual history this week, becoming the first tennis player to represent Australia in five Olympic Games. Her previous best result in women’s doubles was a second-round exit alongside Rennae Stubbs at the 2008 Bejiing Olympic Games.

Australia is still a chance to win an Olympic medal in the mixed doubles competition in Tokyo, with Barty teaming with John Peers to reach the quarterfinals.