Underlining an ability to find his best on a grass court, Jordan Thompson progresses to a third ATP-level semifinal at the Hall of Fame Open in Newport. 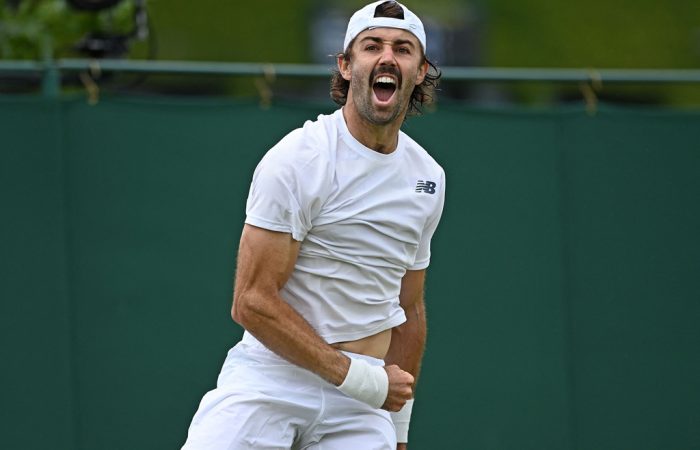 Jordan Thompson will contest his first ATP-level for the 2021 season at the Hall of Fame Open in Newport.

The No.7 seed at the grass-court event, Thompson defeated local player Maxime Cressy 6-3 7-6(3) to set up a final-four showing with another American, Jenson Brooksby.

It will be Thompson’s first semifinal appearance at an ATP tournament since he reached the same stage of Antalya, Turkey, in June 2019. The Australian had earlier reached a first career final in ‘s-Hertogenbosch with victory over the higher-ranked Richard Gasquet.

Thompson was made to work against the world No.155 Cressy in Newport. Securing the 39-minute first set after breaking the American’s serve in the sixth game, Thompson served for the match as he served at 5-4 in the second set.

But Cressy responded superbly to force a second-set tiebreak, with Thompson eventually requiring two match points to secure his victory after an hour and 52 minutes.

“Nearly lost that set in a heartbeat, but thankful strung a couple of points together, and a win’s a win,” a relieved Thompson told the Hall of Fame website.

Set to improve on his current No.71 ranking, Thompson also underlined his grass-court credentials.

All three of his ATP semifinals have come on that surface, with the Sydneysider recently upsetting Kei Nishikori as he progressed to the third round at Wimbledon.

“It’s a unique surface so movement is probably the toughest thing about playing on grass, Thompson related. “And I’d say that’s probably the best part of my game is my movement.”

A meeting with the No.152nd-ranked Brooksby will be a first at this level for Thompson.

The 20-year-old American has upset three higher-ranked opponents, including Peter Gojowczyk in the quarterfinals, to progress to a first semifinal at ATP level.

Thompson also progressed to the semifinal stage of the doubles with Portuguese partner Joao Sousa, but the pair withdrew after a quarterfinal victory over Yoshihito Nishioka and Yasutaka Uchiyama.

Storm Sanders will turn her attention to doubles after exiting to Belgium’s Greet Minnen in the quarterfinals of the Prague Open.

Sanders remains in the doubles alongside Asia Muhammad, with the pair to meet Czechs Bouzkova and Lucie Hradecka in tonight’s semifinals.

Astra Sharma’s run at the WTA 250 event in Lausanne, Switzerland, has ended in a second round loss to No.5 seed Caroline Garcia.

Sharma and American partner Francesco Di Lorenzo had earlier withdrawn from the doubles ahead of their first round match with Alexandra Panova and Julia Wachaczyk.