Leading the way for Indigenous players 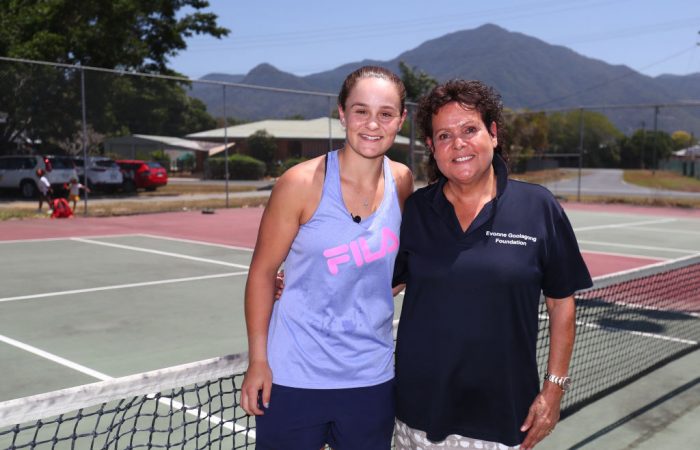 As Ash Barty and her many supporters celebrated the world No.1’s glorious path to a first final at Wimbledon, it was also a special time in other ways.

The first week of July is also NAIDOC Week, which celebrates the history, culture and achievements of Aboriginal and Torres Strait Islander peoples.

Wearing an outfit to pay tribute to the 50th anniversary of Evonne Goolagong Cawley’s first title at Wimbledon, Barty provided a poignant reminder of the heights that Indigenous players have reached.

Barty consulted with her long-time friend and mentor before making a final decision to design her own version of the iconic outfit and was delighted when Goolagong Cawley agreed.

“Evonne has guided the way. She’s created a path for all of us as Australians, but (especially) as a family and for our heritage to know that there is an opportunity to chase after your dreams and to do what you love.

“She’s created a legacy like no other in Australia … I’m exceptionally proud to be able to call her a friend and a mentor, to be able to share heritage.”

Barty is in turn creating history that will almost certainly inspire others to follow in her path.

Earlier in her career-best campaign at Wimbledon, Barty was named in the Australian tennis team heading to the Tokyo Olympics.

She will become the first Indigenous tennis player to compete at an Olympics and adds to the highest representation of Indigenous athletes in an Australian team.

The 16 Indigenous athletes who will compete at Tokyo are an increase of the 12 Indigenous Australians who competed at the Sydney 2000 event.

Barty is excited to be among that group.

“I know that we’ve got a really good group, big group, of Australian Indigenous athletes in our team. I know for me it’s a first for tennis, but there have certainly been a lot of Olympic athletes that have paved the way for me in an Indigenous sense, kind of showing me there is a pathway, that it is possible,” she commented.

“I hope that all of us as one, we’re all united as one in our Australian Olympic team, that we can pave the path for next generations coming through.”

Barty looks back on another role model who sparked her own Olympic dreams.

“I think like many Australians, my favourite Olympic moment is Cathy Freeman,” she said of Freeman’s gold medal-winning performance in the 400-metre track event at the Sydney 2000 Olympics.

“She’s such an icon in our sport, obviously it’s very special for me that we share heritage as well.

“What she did in Sydney was nothing shy of remarkable. And I think most Aussies remember exactly where they were when she ran that race and I’m certainly no different.

“Learning more and more about her journey is as I’ve gotten older, it’s absolutely incredible.”

Equally remarkable are the milestones that Indigenous players Goolagong Cawley and Barty have celebrated – especially as more of those history-making moments are created in NAIDOC Week.