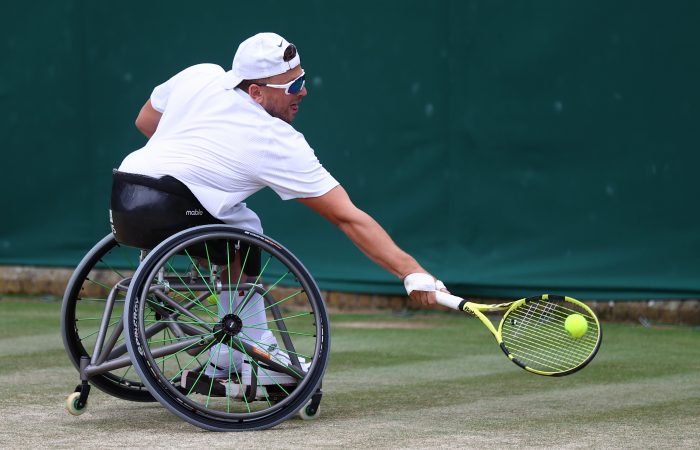 They recorded a 6-1 3-6 6-4 victory against Australia’s Dylan Alcott and Sam Schroder of the Netherlands in today’s final at the All England Club.

The experienced combination dominated the match early, racing to a 6-1 2-0 lead.

Under immense scoreboard pressure, Alcott lifted. Combining powerful ground strokes with fine touch, the 30-year-old Australian managed to change the momentum of the match with his efforts. And as Schroder’s confidence grew, they reeled off four consecutive games to take a second-set lead.

After failing to hold serve in the opening set, Alcott and Schroder lost only six points on serve in an impressive second-set turnaround. Greater depth in their ground strokes were preventing Wagner from dictating play at the net, as the 47-year-old American had done earlier in the match.

Alcott and Schroder maintained their momentum early in the deciding set, with a drop shot return winner from the Australian securing the first break in the fourth game and a 3-1 lead.

However, the spirited Lapthorne and Wagner fought back to win four consecutive games and reclaim the lead.

Alcott and Schroder kept fighting, saving a match point down 3-5 and a further two in the ninth game. But they could not stop Wagner from serving out victory after one hour and 48 minutes on court.

It is Wagner’s 21st Grand Slam doubles title – and a first at Wimbledon, helping him complete a career Grand Slam.

Alcott has another chance to add to his Grand Slam collection tomorrow when he faces Schroder in the quad wheelchair singles final. The world No.1 is aiming to win a 14th Grand Slam singles title and his 21st major title in total.