World No.1 Ash Barty is excited about advancing to her first Wimbledon semifinal, where she'll play former champion Angelique Kerber. 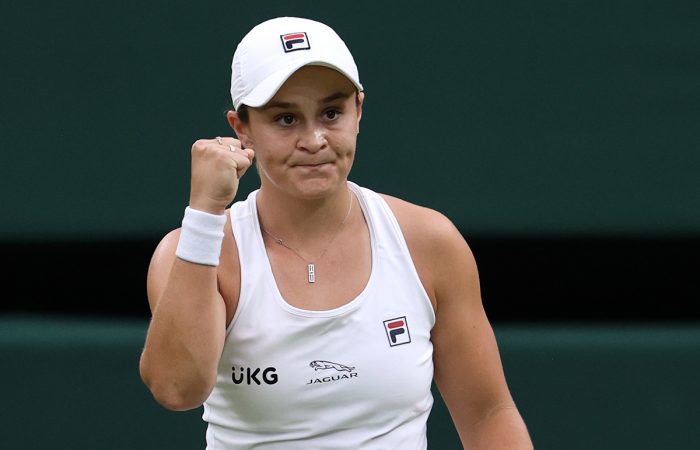 Ash Barty is enjoying a career-best run at Wimbledon, where she has become the first Australian in 21 years to reach the ladies’ singles semifinals.

The world No.1 is now hoping to become the first Aussie ladies’ singles finalist at the tournament since her mentor Evonne Goolagong Cawley in 1980.

However, the chance to create history is not on Barty’s mind right now. Instead, she is focusing on today’s semifinal showdown with former world No.1 Angelique Kerber.

“Sport is a wonderful thing in a sense where there’s no guarantees, no certainties. That’s what makes it so incredible to play and be a part of,” says the 25-year-old from Queensland.

“I think each and every opportunity I get to play, I learn. I take it for what it is. I can’t do any more than that. I can’t think too far ahead or worry about what has happened in the past. It’s about focusing on the present moment and the opportunity that I’ve got. That’s all I do.”

After defeating five first-time opponents to advance to the semifinals, Barty faces a familar foe in Kerber. This is their fifth career meeting, albeit first at Grand Slam level.

Kerber is making her fourth career semifinal appearance at Wimbledon and is hoping to advance to a third final. She finished runner-up to Serena Williams in 2016, then reversed the result when they met again in the 2018 championship match.

Barty, however, is not intimidated by Kerber’s experience at the All England Club, where she boasts a 36-11 career win-loss record.

“It adds to the challenge,” says Barty, who had never previously progressed beyond the fourth round at the tournament. “Angie obviously has an incredible record here. She’s made multiple finals. She’s one of the best grass courters going around. I think the challenge of playing her in a semifinal of Wimbledon is an incredible opportunity, one that I’m really excited for.

“It’s not scary or overwhelming, it’s just exciting. It’s exciting to have the challenge of playing someone who is comfortable on these courts, who knows how to win this tournament.”

Kerber, presently ranked No.28 and on a 10-match winning streak on grass, is anticipating a tough battle against Barty.

“I’m really looking forward to play against Ash,” the 33-year-old German says. “I know that I have to play my best tennis, and she will push me to that, to give everything out there.”

Their head-to-head record is tied at two wins apiece. However, Barty is not paying too much attention to those previous meetings.

“It’s irrelevant. I think we’re both at different phases of our career to where we were each and every time we’ve played,” says Barty, who won the Wimbledon girls’ singles title 10 years ago.

“Of course, we’ve both learnt from those matches without a doubt. We’ve probably both grown and adapted as tennis players and become better tennis players.

“I think there’s that extra challenge of trying to test each other. You go back on those matches and think what worked well, what didn’t work well. But also you understand it’s a completely fresh slate, it’s a new match, a new surface, a new situation. You can’t focus on what happened too much. It’s about going out there and trying to do as best you can on that given day, and if it’s enough, it is. If it’s not, it’s not. That’s kind of all there is to it.”