It’s sixty years since Rod Laver took a significant first step on an historic Grand Slam journey with a first singles title at the All England Club. 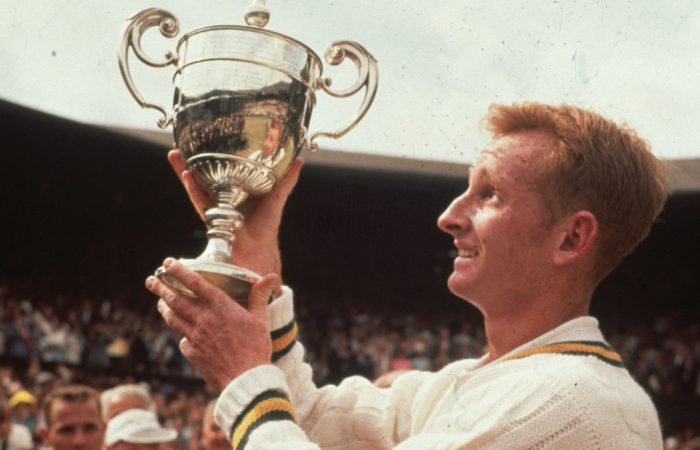 Holding Grand Slam records that still stand more than half a century later, it’s hard to imagine that Rod Laver was ever a player on the rise.

But that’s exactly the position that the Queenslander occupied at 1961 Wimbledon; while the 22-year-old had already lifted the Australian championships trophy, he was yet to break through at any other major event.

That all changed in a glorious fortnight at the All England Club, when the left-handed Laver carved a headline-grabbing path through the draw.

Seeded No.2 at the 1961 Championships, the Australian launched his winning campaign with a straight-sets win over Toomas Leius from the then-Soviet Union. His next two matches would extend to a full five sets.

Laver’s determination in outclassing Frenchman Pierre Damon and Wilhelm Bungert were of little surprise to those who had witnessed the Australian’s earlier progress at the historic event.

Two years previously, Laver progressed to a first Wimbledon final with a marathon semifinal victory against Barry Mackay. Utilising a newly adopted swinging serve that became his trademark, Laver withstood an 87-game battle with the American – the first two sets alone of his eventual 11-13 11-9 10-8 7-9 6-3 victory spanned more than two hours.

Only the third unseeded player in history to reach the gentlemen’s final, Laver lost the 1959 decider to Peruvian Alex Olmedo in straight sets. Laver was also a finalist at 1960 Wimbledon, stretching countryman Neale Fraser to four sets.

The latter stages of Laver’s 1961 breakthrough were a glorious contrast, Laver progressing past countryman Bob Hewitt (who later became a South African citizen), Chilean Luis Ayala and India’s Ramanathan Krishnan without the loss of a set.

But it was a blitzing final performance that was truly astonishing, Laver overcoming American Chuck McKinley in less than an hour.

“It’s said I was still grinning when Princess Marina presented me with the trophy. I was mighty pleased with my performance,” he wrote in Rod Laver: A Memoir of that final.

“I didn’t drop a service game in the match and took only 13 minutes to win the first set. I applied pressure from the outset and didn’t let up.”

Laver would go on to defend his 1961 title, defeating Martin Mulligan in the 1962 Wimbledon final on his way to claiming the calendar-year Grand Slam that year.

There were also Wimbledon triumphs in 1968 and 1969, when Laver claimed the coveted calendar-year Grand Slam again. No male player has since claimed every major title in a single season – one of many Laver records that still stands.