A quarterfinal run in the ladies' doubles draw at Wimbledon is a career-best effort for Australia's Storm Sanders. 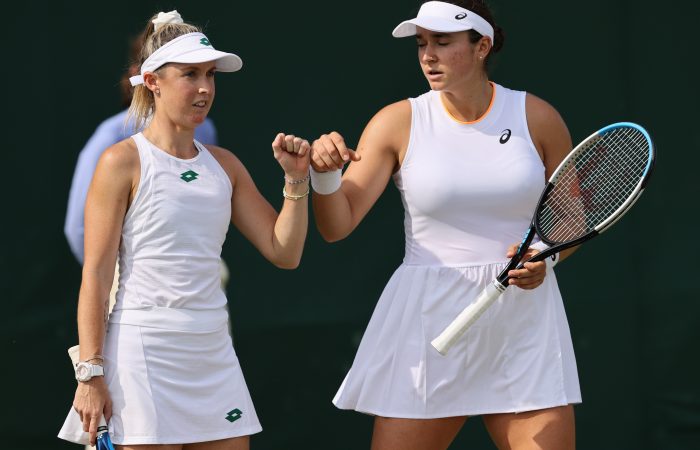 For the first time in her career, Storm Sanders is into a women’s doubles Grand Slam quarterfinal.

The 26-year-old Australian and her American partner Caroline Dolehide advanced with a 7-6(4) 6-2 victory against Ukrainian Nadiia Kichenok and Romanian Raluca Olaru on third-round action at Wimbledon today.

Sanders, who is currently ranked at a career-high of No.59, and Dolehide, a 22-year-old American ranked No.40, are yet to lose a set this tournament and impressively, only faced a single break point in their clash with the No.13 seeds.

Contesting only their second tournament together, their career record as a team now stands at six wins from seven matches.

They’ll look to continue this sensational form when they face seventh-seeded sisters Hao-Ching Chan and Latisha Chan from Chinese Taipei in the quarterfinals.

Peers and Chinese partner Zhang Shuai recorded a 6-2 6-3 win against Czech combination Roman Jebavy and Marketa Vondrousova in second-round action today. The No.17 seeds did not lose serve in the 68-minute match.

Rodionova, who is partnering Belarusian Andrei Vasilevski, advanced to the third round after the withdrawal of their second-round opponents. They now play No.4 seeds American Nicole Melichar and France’s Edouard Roger-Vasselin, who were meant to play Nick Kyrgios and Venus Williams in the second round.

Unfortunately Kyrgios was unable to compete in his scheduled match due to an abdominal injury.