Luke Saville and Max Purcell are leading the Australian charge in gentlemen's doubles at Wimbledon, moving into the third round. 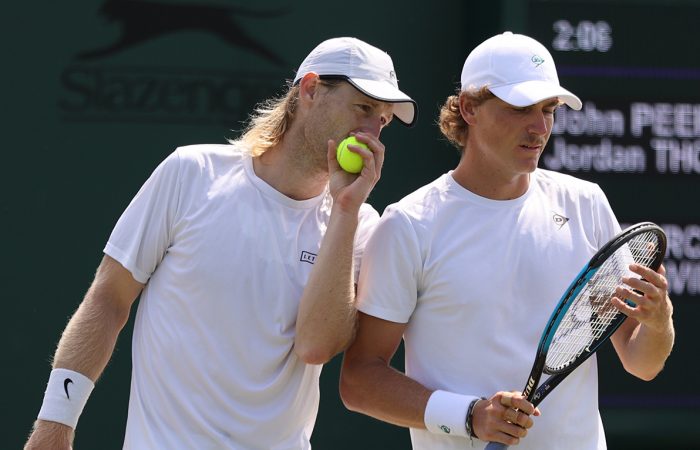 Australian duo Luke Saville and Max Purcell have extended their career-best run at Wimbledon, moving into the third round in the gentlemen’s doubles draw.

The No.16-seeded combination, who had never previously won a match at the All England Club, recorded a 6-2 6-4 victory against British pair Luke Bambridge and Dominic Inglot in second-round action today.

Needing only 58 minutes to advance, Purcell and Saville lost just 11 points on serve. It sets up a third-round showdown with third-seeded Colombians and defending champions Juan Sebastian Cabal and Robert Farah.

Purcell and Saville are the last remaining Australians in the draw, with Matt Ebden and John-Patrick Smith beaten in three sets in the second round. Alexei Popyrin and his South African partner Lloyd Harris also lost in a three-set battle.

Storm Sanders is enjoying a career-best run in the ladies’ doubles competition, reaching the third round alongside American partner Caroline Dolehide. This is the deepest the 26-year-old Sanders has ever advanced in a Grand Slam doubles draw.

Sanders and Dolehide progressed with a 6-2 6-3 win against Romanian duo Andreea Mitu and Monica Niculescu.