Australia's Nick Kyrgios has won a five-set battle against No.21 seed Ugo Humbert in the opening round at Wimbledon 2021. 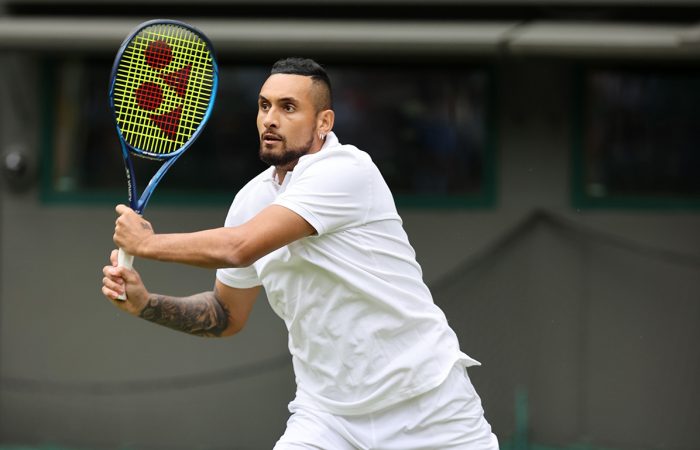 Nick Kyrgios is known for putting on a show – and he certainly did not disappoint in his opening-round match at Wimbledon.

The world No.60, who is playing his first tournament since February’s Australian Open, scored a steely come-from-behind 6-4 4-6 3-6 6-1 9-7 victory to eliminate in-form No.21 seed Ugo Humbert.

After a near three-hour battle yesterday, which featured sensational shot-making from both players and plenty of momentum swings, the match resumed today at 3-all in the deciding set.

Games went on serve in the resumption of play, with Kyrgios surviving an injury scare in the 13th game when he slipped and gasped in agony.

“No matter if it was something bad, I was always going to get up and play. With one leg, I was going to finish the match,” Kyrgios said.

The fall hardened Kyrgios’ resolve, helping him break Humbert’s serve in the 15th game. But the twists and turns in this thriller continued.

Exceptional returning earned the Frenchman two break points, one of which Kyrgios saved with a blistering down-the-line backhand winner.

Humbert, who defeated two top-10 ranked opponents to win the Halle title on grass a fortnight ago, threw everything he had at the enigmatic Australian. He finished the match with 50 winners – but that wasn’t enough to stop Kyrgios.

Stepping up under pressure, Kyrgios sealed victory with an unreturnable serve on his first match point.

“I really enjoyed being out there,” Kyrgios said. “He’s a hell of a player. It could have gone completely his way.”

The result improves Kyrgios’ career win-loss record in five-set matches to 9-3, highlighting his innate ability to lift on the biggest occasions.

Kyrgios now plays world No.79 Gianluca Mager of Italy in the second round.

“I’m doing my best. So I’ll continue to go out there and try and give them a show,” Kyrgios said.

He is one of five Australian men to reach the second round at Wimbledon this year, joining Jordan Thompson, James Duckworth, Alex Bolt and Marc Polmans.