Top seed Ash Barty is through to the second round at Wimbledon after beating inspirational Spaniard Carla Suarez Navarro in three sets. 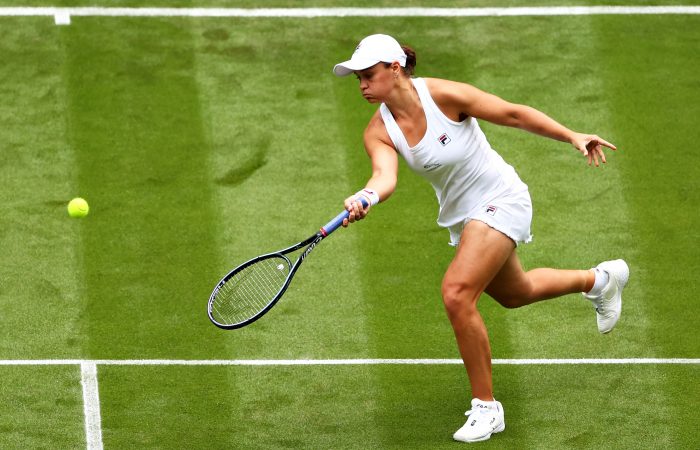 World No.1 Ash Barty has overcome a gallant opponent to make a winning start to her Wimbledon campaign.

Competing in her first event since a hip injury forced her out of Roland Garros earlier this month, Barty made an impressive start. She fired 13 winners to two in a 25-minute opening set, which included a brief rain delay to allow the Centre Court roof to be closed.

“To be able to go out there today and play the way that I did was really nice. Overall it was just a really solid match to start things off,” Barty said.

The second set proved a tighter battle, with a free-swinging Suarez Navarro heaping more pressure on the top seed.

Barty served for the match at 5-4 in the second set, but was broken. Showing the fortitude that makes her a fan favourite, Suarez Navarro then managed to force a deciding set.

But the Australian showed her class under pressure, winning the opening 13 points of the third set to quickly regain momentum.

Barty closed out the match in one hour and 43 minutes, finishing with 37 winners to Suarez Navarro’s 12.

“Grass-court tennis has always felt like it’s come quite naturally to me. It’s just about trying to go out there and play the best that I can on that day,” Barty said. “I thought at times today I served well, was able to control the court. For all but one little hiccup, serving for the match, it was really good.”

It marks the final Wimbledon appearance for Suarez Navarro, who said has previously reached the fourth round at the tournament on three occasions.

The 32-year-old Spaniard, who recently returned to the tour after overcoming Hodgkin’s Lymphoma, is retiring at the end of this season.

“It was just incredible to be able to share the court with Carla,” Barty said.

“She’s a fighter, an incredible competitor and a lovely person. Genuinely, you can’t find one bad word to say about her … I wish both of us could have been able to win.

“All credit goes to her for her resilience and her nature as a competitor, to be able to come back from the adversity that she has, and to be able to have that moment with her was nothing shy of remarkable.”

I just think @CarlaSuarezNava is an absolute star. An inspiration and no doubt the toughest person competing at the championships.

Barty’s attention now turns to a second-round clash with world No.89-ranked Russian Anna Blinkova. It will be their first career meeting.