Nine Australians will contest the gentlemen's singles draw at Wimbledon 2021. 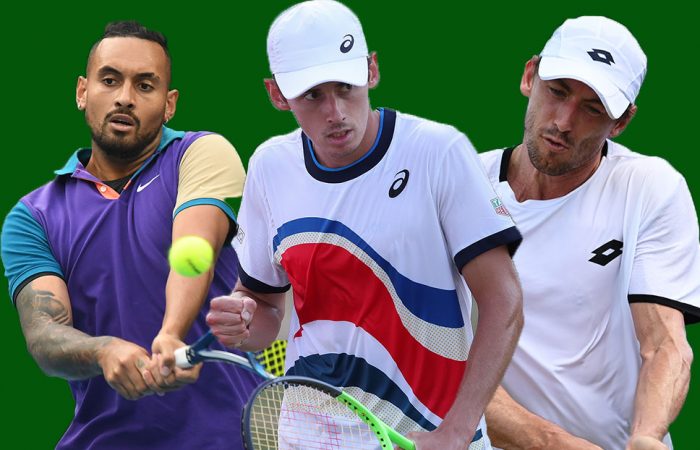 It has been 19 years since Lleyton Hewitt claimed the gentlemen’s singles title at Wimbledon. Is this the year another Australian follows in his footsteps and joins the illustrious list of champions at the All England Club?

There are nine Aussie contenders in this year’s draw …

John Millman, 32, Queensland
Making his sixth Wimbledon main draw appearance, Millman faces world No.10 Roberto Bautista Agut in the first round. The eighth-seeded Spaniard was a Wimbledon semifinalist in 2019 and boasts a 5-0 win-loss record against Millman. The world No.43’s confidence is high, however, after scoring his best grass-court win in five years at Queen’s earlier this month, saving match points to defeat world No.32 Reilly Opelka. It was a showcase of the spirited efforts that always make 32-year-old Millman tough to beat.
Wimbledon career win-loss record: 6-5
Wimbledon best result: Third round (2016, 2019)

Nick Kyrgios, 26, ACT
This is the world No.61’s first competitive appearance since at the Australian Open and his first tournament overseas in 16 months. “I know it’s not going to be easy to just turn the switch on,” Kyrgios says. “I’m not putting too much expectations or pressure on myself.” Kyrgios, who has made the second week at the All England Club three times, faces No.21 seed Ugo Humbert in the first round. It is an Australian Open rematch from February, where Kyrgios memorably saved two match points in a second-round win.
Wimbledon career win-loss record: 13-6
Wimbledon best result: Quarterfinals (2014)

Alexei Popyrin, 21, NSW
In his Wimbledon debut in 2019, Popyrin made the second round as a No.101-ranked qualifier. He returns as the world No.67 and having made giant strides this season. Winning a first ATP title in March was a highlight for Popyrin, who is building a reputation as a steely competitor after saving match points in multiple wins. He plays Japan’s Kei Nishikori in the opening round. Currently ranked No.53, 31-year-old Nishikori is a former world No.4 and two-time Wimbledon quarterfinalist.
Wimbledon career win-loss record: 1-1
Wimbledon best result: Second round (2019)

Jordan Thompson, 27, NSW
Wimbledon draws have never been kind to Thompson, pitting him against higher-ranked opponents (three ranked inside the top 25) in his four previous appearances. This year’s draw is just as tough, with No.12 seed Casper Ruud his first-round assignment. The world No.72 is a proven grass-court threat though, making his only tour-level final on the surface in 2019. Both Thompson and Ruud made quarterfinal runs in Mallorca this week, setting the scene for a high-quality showdown at the All England Club.
Wimbledon career win-loss record: 0-4
Wimbledon best result: First round (2016, 2017, 2018, 2019)

James Duckworth, 29, NSW
With six grass-court wins in the past month, Duckworth enters the tournament with growing confidence. His victory against world No.36 Adrian Mannarino in Stuttgart was his first top-50 win on grass, proving the world No.88 can mix it with the world’s best. The recent passing of his grandmother Beryl Collier (nee Penrose), who was a Wimbledon quarterfinalist in 1955, is sure to provide added motivation in his fifth main draw appearance. Duckworth plays world No.92 Moldovian Radu Albot in the first round.
Wimbledon career win-loss record: 1-4
Wimbledon best result: Second round (2015)

Chris O’Connell, 27, NSW
It has been a big year of milestones for O’Connell, who scored a first top-50 win to reach the Australian Open second round and made his Roland Garros debut. Now he can add a maiden Wimbledon appearance to that list. The world No.131 won three qualifying matches to secure his place in the draw. “It’s great to feel you’ve really earned it,” says O’Connell, who plays No.13 seed Gael Monfils in the opening round. The 27-year-old’s momentum is a contrast to Monfils, who has won only two matches so far this season.
Wimbledon career win-loss record: 0-0
Wimbledon best result: Making debut

Alex Bolt, 28, SA
Making his second Wimbledon main draw appearance, the world No.150 received a wildcard after winning an ATP Challenger title in Nottingham last week. The left-handed Bolt had been on a nine-match losing streak stretching back to February, but won seven matches to claim his biggest career title as a qualifier. With his confidence restored, Bolt will fancy his chances against world No.44 Filip Krajinovic. The 29-year-old Serbian has never won a match at Wimbledon and his last tour-level win on grass was in 2015.
Wimbledon career win-loss record: 0-1
Wimbledon best result: First round (2018)

Marc Polmans, 24, Victoria
After qualifying at a major tournament for the first time in his career, Polmans declared he hoped to draw Roger Federer in his Wimbledon debut. “I’d really like to play him before he retires. He’s a role model for all us tennis players,” said the world No.154. Polmans did not get his wish. Instead, he faces the lowest-ranked player in the field – Yen-Hsun Lu, a Chinese Taipei player ranked No.624 and using a protected ranking to enter. The 37-year-old Lu was, however, a Wimbledon quarterfinalist in 2010.
Wimbledon career win-loss record: 0-0
Wimbledon best result: Making debut