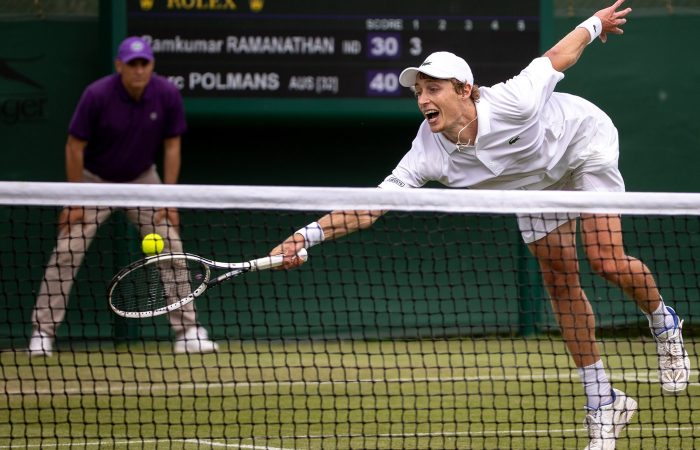 The number of Australians competing in the gentlemen’s singles draw at Wimbledon 2021 has been bolstered to nine, with Marc Polmans and Chris O’Connell both earning spots as qualifiers.

Polmans secured his Wimbledon main draw debut with a hard-fought 6-3 3-6 7-6(2) 3-6 11-9 victory against Indian Ramkumar Ramanathan in the final qualifying round. The 24-year-old Australian hit 75 winners and just 20 unforced errors in the three-hour and 30-minute battle. It marks the first time the world No.154 has qualified at a Grand Slam tournament.

“I’m very happy to come away with a win,” Polmans said. “It’s in my top three (career-best) wins.”

O’Connell has also qualified at a major for the first time, with the 27-year-old proving too consistent for Czech Tomas Machac in their final-round clash. The world No.131-ranked Australian posted a 7-6(6) 6-4 7-6(4) victory.

“It’s great to feel you’ve really earned it,” O’Connell said, looking ahead to his Wimbledon debut.

Astra Sharma and Priscilla Hon’s qualifying hopes have been dashed, with both losing their final-round matches in three-set tussles.

Sanders, who is competing in Wimbledon qualifying for the first time, recorded a 6-3 6-2 win against former top 40 player Aleksandra Krunic.

While Rodionova continued her stunning form to eliminate No.32 seed Magdalena Frech in two hard-fought sets. The 31-year-old Rodionova fought back from deficits in both sets of her 7-5 7-5 victory to record her ninth win of this year’s grass-court season.