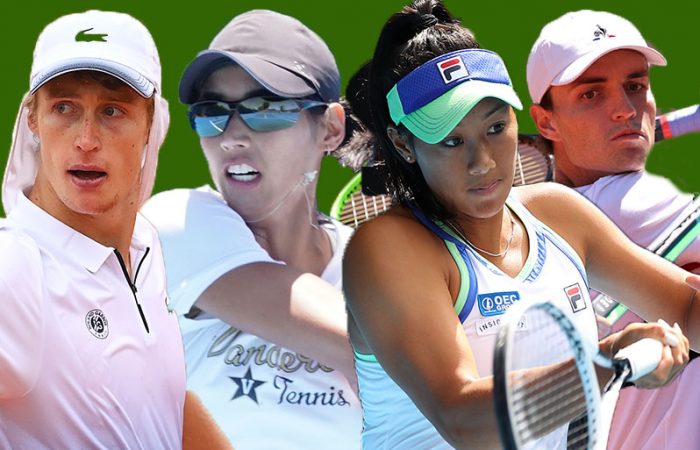 There is lots to play for when our last-remaining Australian hopes take to the court in Wimbledon 2021 qualifying action today.

Four Aussies feature in final qualifying round matches, where the prize is a coveted main draw spot. We also have three women competing in second-round singles matches, each hoping to keep their qualifying quests alive …

Storm Sanders (AUS) v Aleksandra Krunic (SRB)
Ladies’ qualifying singles, second round, Court 2, second match
After saving a match point to defeat former world No.5 and third seed Sara Errani in the opening round, the draw does not get any easier for Sanders. The 26-year-old Australian, who is at a career-high ranking of No.147, now meets Krunic. Although the 28-year-old Serbian is currently ranked No.211, she is a former world No.39 whose best result at Wimbledon is a third-round appearance.
Head-to-head record: Krunic leads 1-0
Last meeting: Krunic won 6-3 6-1 (Roland Garros, May 2014)

[32] Marc Polmans (AUS) v Ramkumar Ramanathan (IND)
Gentlemen’s qualifying singles, final round, Court 8, second match
Polmans is enjoying a career-best run, reaching the final qualifying round at Wimbledon for the first time in four attempts. The 24-year-old, who is yet to lose a set this week, has a 0-3 record at this stage in Grand Slam qualifying. Determined to qualify at a major for the first time, the world No.154 plays Ramanathan for a main draw spot. The 26-year-old Indian, who is ranked No.212, is also trying to qualify at a Grand Slam for a first time.
Head-to-head record: Ramanathan leads 1-0
Last meeting: Ramanathan won 6-7(5) 7-6(5) 7-6(9) (Pune, November 2017)

> READ: Four Australians into final qualifying round at Wimbledon

[16] Chris O’Connell (AUS) v [27] Tomas Machac (CZE)
Gentlemen’s qualifying singles, final round, Court 18, second match
Competing at Wimbledon for a first time, O’Connell has scored two hard-fought wins to earn his place in the final qualifying round. Standing in the world No.131’s way of a coveted main draw spot is 20-year-old Machac, who before this week had never won a tour-level match on grass. The 27-year-old O’Connell is familiar with the world No.143 Czech, having beaten him twice at ITF Future events in 2019.
Head-to-head record: O’Connell leads 2-0
Last meeting: O’Connell won 6-0 6-2 (Antalya, April 2019)

[19] Astra Sharma (AUS) v [16] Claire Liu (USA)
Ladies’ qualifying singles, final round, Court 9, third match
The determined Sharma is aiming to qualify at Wimbledon for a first time. The 25-year-old Australian, who is ranked No.127, is striking the ball incredibly well and has hit 57 winners to reach the final round. Her opponent, Liu, won the Wimbledon 2017 girls’ singles title and made the second round in her 2018 main draw debut, where the world No.120 was the only player to win a set against eventual champion Angelique Kerber.
Head-to-head record: First career meeting

Priscilla Hon (AUS) v [4] Anna Kalinskaya (RUS)
Ladies’ qualifying singles, final round, Court 13, third match
Only a month into her comeback from a hip injury, Hon is quickly building some impressive momentum. The 23-year-old from Queensland has not lost a set this week and is now one win away from qualifying at a Grand Slam for the first time. To do so, the world No.176 must defeat 22-year-old Kalinskaya. The No.111-ranked Russian, who once dated Australia’s Nick Kyrgios, is aiming to qualify at a major for a seventh time.
Head-to-head record: First career meeting