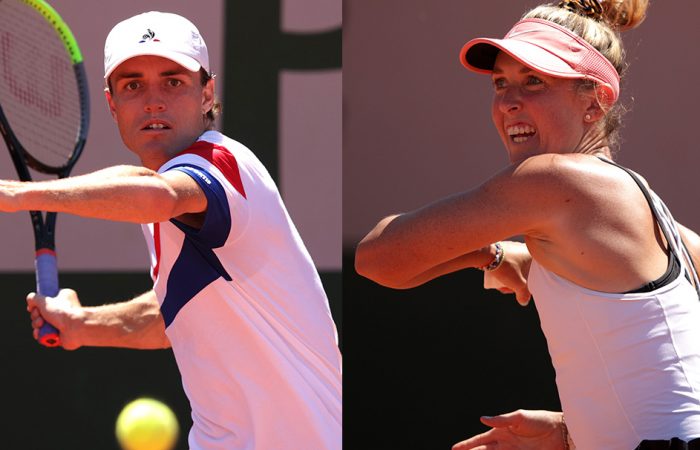 Despite losing in the opening round in their Roland Garros main draw debuts, Australians Chris O’Connell and Storm Sanders are taking positives from their experiences.

O’Connell, a 26-year-old from Sydney, pushed world No.52 Tommy Paul to five sets in their opening-round clash. It marked the first time in the world No.129’s career he had played a five-set match, which he described as an “amazing experience”.

O’Connell is now turning his attention to Wimbledon, where he’ll also be competing for a first time.

“I need to get over this loss pretty quickly because Wimbledon’s just round the corner,” O’Connell said.

“It’s my first-ever grass court season. I’ve never done qualifying for Wimbledon, so I’m excited for the next few weeks.”

Sanders is adopting a similar attitude after a 6-4 6-1 loss to No.14 seed Elise Mertens in the opening round in Paris.

“I’m clearly disappointed, but I’m going to rewatch the match and try and learn from it and use it the next time I play a top-20, top-10 player,” said Sanders, who was contesting her first Grand Slam main draw since Australian Open 2016. “I have had this experience and I’m ready for the next opportunity.”

The 26-year-old Australian earned her place in the main draw through qualifying, where she won three straight-sets matches to qualify at a major for the first time.

It continues a breakout year for Sanders, who is currently at a career-high singles ranking of No.161 and projected to rise even higher following her efforts in Paris.

“I’m playing really good tennis, consistent tennis this year, and obviously qualifying for the French Open was an amazing achievement for me,” Sanders said.

“I’m still hungry. I want to keep feeling this. I want to be playing main draws of Slams. For me, it’s given me this extra motivation. I’ve got Wimbledon qualifying in a few weeks, and hopefully by the US (Open), if I’m in main draw on my own ranking, that would be a huge goal for me.

“I’m just motivated more than ever to keep working hard, backing myself and trying to have these experiences against the top players as much as possible.”