Wildcards for Astra Sharma and Chris O'Connell boost the number of Australians in the Roland Garros 2021 singles main draws to nine. 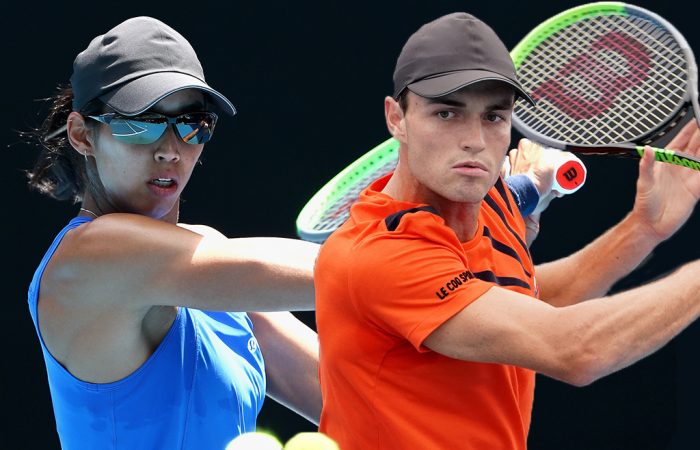 Astra Sharma and Chris O’Connell have been awarded main draw wildcards into Roland Garros, which commences in Paris on Sunday 30 May.

Sharma, a 25-year-old from Western Australia, is currently the third highest-ranked Aussie woman.

The world No.116, who defeated world No.27 Ons Jabeur to win her first WTA singles title in Charleston last month, is delighted to receive direct entry into the prestigious Grand Slam on clay.

“I was extremely surprised and very grateful to get the wildcard … I was very excited when Alicia (Molik) told me,” Sharma said.

“I’ve been playing pretty well and am looking forward to trying to do my best with this opportunity. I’m playing really well on clay, really good movement and physicality, and just hoping to prepare in the right way and keep that up.

“In terms of competing, I’ve always loved playing at the French, Paris is a good city for me in terms of conditions and surface, so not trying to set too many expectations going in, just looking to do the most with what I’ve got.”

This will be Sharma’s third consecutive main draw appearance at Roland Garros. Last year she reached the second round, scoring a career-best Grand Slam win against world No.58 Anna Blinkova in the opening round.

The 26-year-old Sydneysider, who has retained his position inside the world’s top 150 since October 2019, will play his fifth Grand Slam main draw.

“Lleyton (Hewitt) gave me a call on Tuesday, which obviously was very exciting for me,” O’Connell said.

“Being able to compete in my first Roland Garros main draw is a dream of mine.

“For the past two months since Miami I have been in Split, Croatia working with Marinko Matosevic who is now coaching me and also rehabbing an ankle injury. I didn’t want to start playing again until I knew I was 100 per cent, which I now am and have just arrived in Belgrade to play qualifying at the ATP 250 before heading to Paris.”

“We are extremely pleased to be able to provide Astra and Chris with the opportunity to compete at Roland Garros,” Tennis Australia Director of Performance Wally Masur said.

“Both players have proven they can compete with the world’s best and I’m sure they will maximise this opportunity.”

Nine Australians will contest the main draw in Paris, led by world No.1 and 2019 champion Ash Barty. A further 12 will compete in qualifying, including 19-year-old Olivia Gadecki who has received a wildcard.

Gadecki has continued to thrive after her breakout Australian summer, which included a stunning upset of world No.4 Sofia Kenin during the Melbourne Summer Series. The Queenslander has since built an 18-5 win-loss record playing ITF events in Egypt and Turkey, where she claimed her maiden professional singles title earlier this month.

The Roland Garros qualifying event begins on Monday 24 May, before main draw action starts on 30 May.