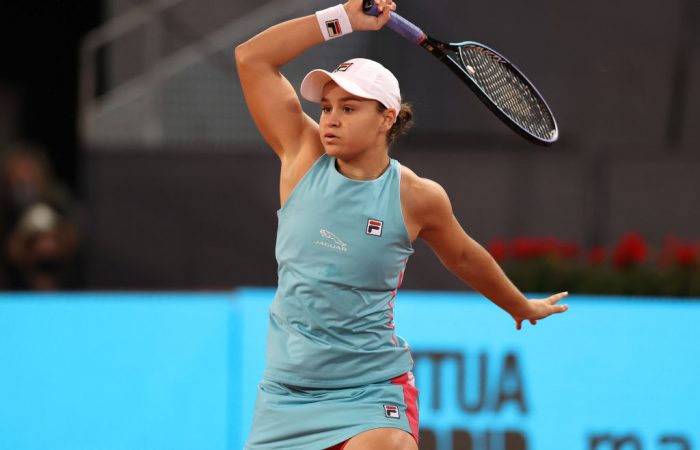 Ash Barty will face Iga Swiatek in the final 16 of the Madrid Open, following a hard-fought win over Tamara Zidansek.

A battle between the two most recent Roland Garros champions – Barty triumphing at the clay-court major in 2019 and Swiatek the 2020 winner – will be a first career meeting between the WTA stars.

It was a 13th straight match win on European clay for the world No.1 from Queensland, who sat out the 2020 clay-court season due to the pandemic.

Taking her 2021 match-winning record to a WTA-high 22 for this 2021 season, Barty also recorded her 10th win from the 11 three-set matches she’s contested this year.

While she fired nine aces against the world No.80th-ranked Zidaensek, Barty admitted there was room for improvement.

“(It was) a really tough match,” Barty told media afterwards.

“I felt my margins were a little bit off today. Made a lot of errors. I think I was missing in the right way, but still just a foot or two here or there makes a big difference. I felt like there were probably too many loose ones for me today.”

Alexei Popyrin also battled to a three-set win in Madrid, the Australian overcoming Argentina’s Federico Coria 6-7(4) 6-4 6-3  in the first round of qualifying for the ATP Masters 1000 tournament.

It was a tougher day for fellow Australian Jordan Thompson, who exited to Carlos Taberner in qualifying.

Alex de Minaur will begin his main draw campaign in Madrid tonight, the Australian facing Spaniard Jaume Munar in the opening round.

Casper Ruud proved too tough for Australia’s John Millman in the Munich quarterfinals, the second seed completing the pair’s rain-delayed match with a straight-sets win.

The 22-year-old Ruud, who made a first final-16 Grand Slam appearance at AO 2021, subsequently exited to Nikoloz Basilashvili in the semifinals.