Ash Barty caps a stellar week in Stuttgart by claiming both the singles and doubles title at the WTA 500 tournament. 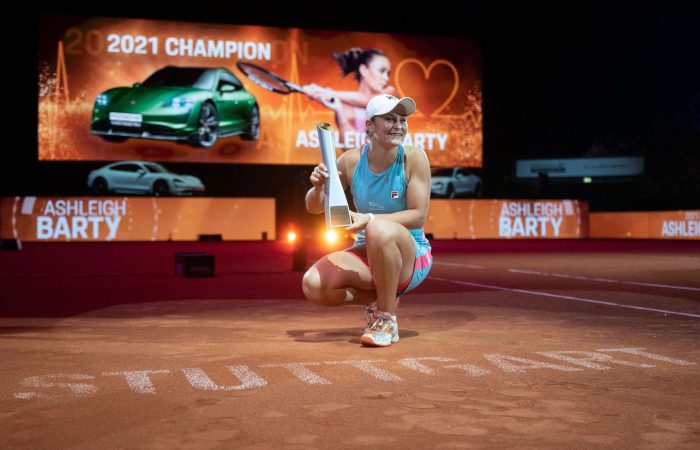 Ash Barty’s impressive tour return has netted another WTA singles title, claiming her third of the season in Stuttgart.

Barty fired 26 winners in a 3-6 6-0 6-3 victory against world No.7 Aryna Sabalenka in the final. She then returned to court to claim the doubles title alongside American Jennifer Brady.

“This week’s been phenomenal for me,” said Barty said. “We’ve played a lot of tennis, a lot of matches.

“And I’ve certainly felt like I’m taking my tennis to kind of a new level, in a sense of being able to be calm and play with freedom and play without consequence in a way, just going out there and try to bring my best every single point.”

It is the third singles match in a row that Barty has recovered from losing the opening set.

“Tennis is a strange sport at times,” Barty said. “Even though you can be a set down, I didn’t feel I was very far off. I had a couple of break points and opportunities myself, you take one or two of those and it’s a completely different ball game.”

This is Barty’s second career WTA singles title on clay, having won her first at Roland Garros in 2019. It is her 11th WTA singles career title in total and extends her winning streak in finals to six matches.

In the doubles final, Barty and Brady secured their first WTA title as a team with a 6-4 5-7 [10-5] win against top-seeded Americans Bethanie Mattek-Sands and Desirae Krawczyk.

It is Barty’s 12th career doubles title – and first since claiming the Rome title with Victoria Azarenka in May 2019.

The victory also makes Barty the first player to scoop both the singles and doubles titles in Stuttgart since American Lindsay Davenport in 2001.