Back to back in Miami: Barty defends prestigious crown

World No.1 Ash Barty joins elite company with the successful defence of her Miami Open title. 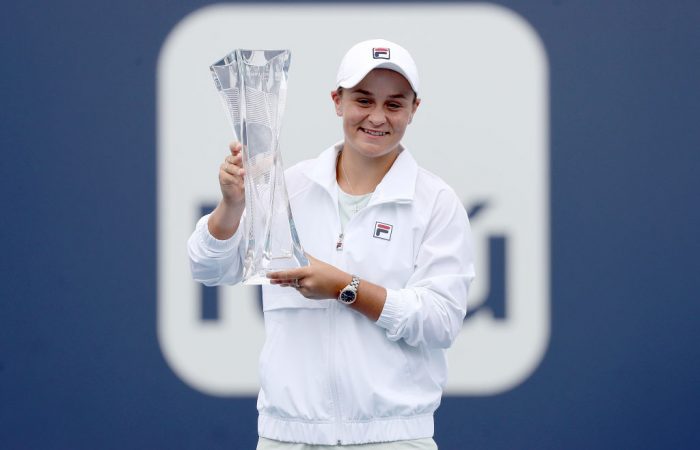 World No.1 Ash Barty has lifted her 10th WTA singles trophy after the successful defence of her Miami Open title.

The Australian defeated Bianca Andreescu 6-3 4-0 after the Canadian withdrew from the final with a right ankle injury.

Marking the first time that she has defended a title, Barty is only the sixth woman to defend the prestigious Miami Open crown.

World No.1 @ashbarty defends her @MiamiOpen title and picks up her 🔟th WTA trophy! pic.twitter.com/Du7IkxMjGx

While acknowledging “I’ve got a long, long way to go yet before I can be in discussion with those names”, Barty is underlining an authoritative hold at the top of the rankings.

The first top seed to win the Miami trophy since Serena Williams in 2015, Barty is only the second woman to win multiple trophies this year (joining Daria Kasatkina, a winner of the Phillip Island Trophy and St.Petersburg).

Opting to remain in Brisbane after the tour resumption in 2021, Barty claimed the first tournament she contested in almost a year – the Yarra Valley Classic at the Melbourne Summer Series – in February.

Victory at the Miami Open – Barty’s first event outside Australia since the Qatar Open in February 2020 – required  tremendous fighting ability from the outset.

She saved a match point against Kristina Kucova in her opening match and recorded victories over fellow Grand Slam champions Jelena Ostapenko and Victoria Azarenka.

Barty asserted herself early in a first meeting with Andreescu, breaking the Canadian’s serve in the second game and consolidating to take a 3-0 lead. Despite surrendering one service break of her own, Barty broke again in the sixth game and went on to secure the set.

After suffering an ankle injury early in the second set, the No.8 seed was forced to retire in the fourth game.

“It’s never the way you ever want to finish a match, particularly in a final. I really do feel for Bianca. I think she’s had such a rough trot with injuries in the past,” said a sympathetic Barty, who anticipates further tests from the talented Canadian.

“I think that’s going to be one of the first of many battles for us.”

Barty’s attention now turns to the Volvo Car Open in Charleston, where the top seed is hoping to maintain momentum from her Miami milestone.

“I felt like with each match I have been playing better and better, which is ultimately what we are after,” said Barty.

“To be able to have the title at the end is a bonus, and to be able to defend my title the first time in my career I’ve been able to do that is really, really special too.”

No.1 Ashleigh Barty makes it 12 consecutive wins in Miami as she takes her 2nd #MiamiOpen title after Andreescu retires 63 40.