Ash Barty: “It’s an adventure for us”

World No.1 Ash Barty reflects on her return to international travel as she prepares to defend her Miami Open title this week. 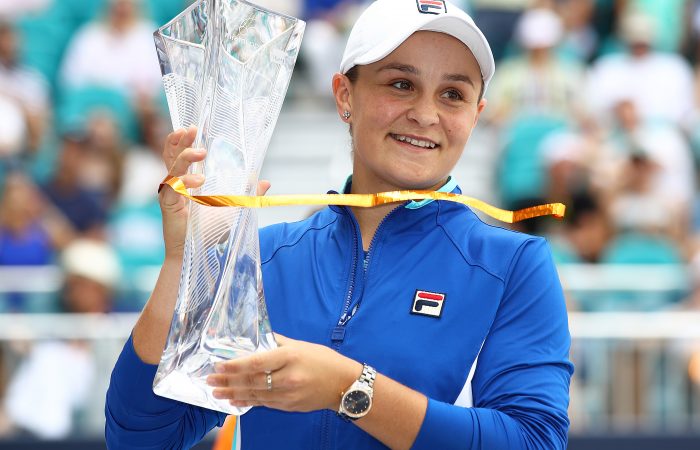 Australia’s Ash Barty is all set to play her first tournament internationally since the start of the COVID-19 pandemic.

The 24-year-old from Queensland is in Miami this week, where she is the defending champion.

“It’s an adventure for us,” Barty said of her return to international competition.

“When leaving Australia it was quite hard to leave and quite emotional to leave, but I think we’re excited to have the opportunity to play the whole season.”

Barty and Melbourne-based coach Craig Tyzzer now expect to remain overseas for the remainder of the 2021 season.

“You know, touch wood, everything goes well with the rest of the world and where we’ll be travelling to and playing tournaments, so we’ll be able to play safely and feel really comfortable,” Barty said.

“I think we can’t plan too far ahead, as we know, everything can still change so rapidly, but we’re planning as best as we can.”

Barty, who receives an opening round bye in Miami, will face either Slovak Kristina Kuchova or American Hailey Baptiste in her first match.

“We’re extremely excited to be back playing and have the opportunity to come out here and feel like we’re in a very safe environment, to be able to play and to be able to enjoy what we do,” Barty said.

“It was certainly bizarre leaving Australia, we had quite a lengthy trip over here. We had a couple of flight cancellations and it turned out to be a near 50-hour trip to get here. So it was certainly not the easiest one getting over, but just nice to be back here competing and doing what we love.”

A return to Miami, where Barty made her top-10 breakthrough in 2019, provides further cause for optimism.

“Obviously, (this is a) tournament where we have so many good memories,” Barty said.

“I think this week for me a couple years ago was one of the best of my career, where I played consistent tennis throughout the whole week. So looking forward to challenging myself once again, to try and bring that bring that tennis.”