Remarkably, given how much he’s done of it, it’s not winning that matters most to prolific champion Dylan Alcott – a proud role model on and off the court. 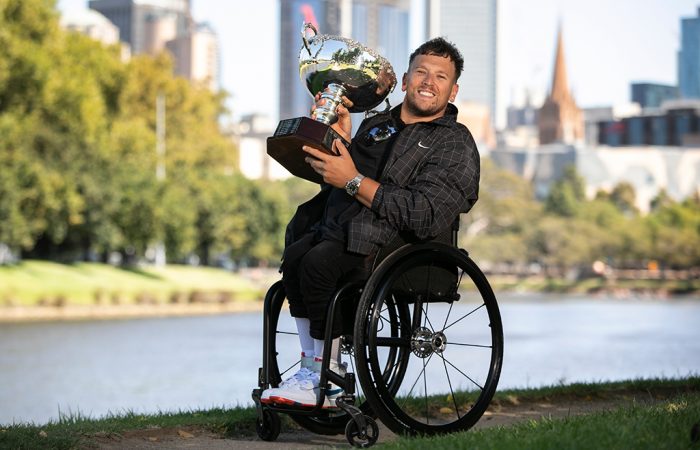 Closing in on one of the most remarkable feats in modern tennis – winning seven straight singles titles at one Grand Slam – Dylan Alcott had to double-check the numbers.

“This might sound a bit weird, but to me, the difference between six and seven Grand Slams isn’t the number,” said Alcott after winning through to the Australian Open 2021 quad wheelchair singles final.

“It’s the journey of getting there and what you do. People actually go ‘how many Grand Slams have you won?’ and I actually lose count because I don’t really mind too much.

“What I mind about is how I carry myself and my real purpose in life, which is changing perceptions so people with disabilities can get out there and be the people they want to be.

“It’s not really about winning Grand Slams; it really isn’t – that’s a by-product.

“It helps me do my real purpose, which is seeing little kids and going, they want to get out there and live the lives they want to live, and tennis is an avenue for me to be able to do that.”

It’s an attitude that manifests in many ways for Alcott. Before his semifinal against Niels Vink, Alcott spoke of a close friendship with the Dutch teenager.

He’d in fact warmed up with Vink before they faced off in the 2020 French Riviera Open final and recently contributed a video message to his surprise 18th birthday celebrations.

It’s natural to wonder if the 30-year-old is conscious of the example he sets to players like Vink.

“I don’t go in there to be a role model, I ‘m just going to be me,” Alcott responded. “If someone is a good person, then we’re going to be mates, and that doesn’t matter if they’re competition or not in my opinion.”

Competitive spirit is another matter entirely. Alcott has showed bucketloads of it in Melbourne this week, culminating in his comprehensive victory over Sam Schroder in Wednesday’s quad singles wheelchair final.

The only wheelchair player, in any division, to claim seven straight titles at any major, Alcott had earlier combined with Heath Davidson to win their fourth consecutive doubles final – another record for the Australian, a winner of 20 Grand Slam titles in total.

Whether the Australian Open trophies will stop on that number is yet to be determined.

Alcott has been open recently about a potential deadline to his record-breaking tennis career, reasoning that he’ll “see what happens” after the next Paralympics.

“It’s a feeling, I think,” Alcott said. “I’ll play that match point, whatever that match is hopefully in Tokyo and I’ll know if I want to keep going or not.”

For now, Alcott appreciates that “every day is a lucky opportunity to play tennis,” repeatedly referencing his gratitude for competing at Australian Open 2021 amid difficult global circumstances.

When the time comes to move on the from the sport, Alcott will do so with an appreciation of the huge progress in his competitive era.

In 2019, he claimed the first-ever quad wheelchair titles when the event was introduced at Roland Garros and also became inaugural singles and doubles champion at Wimbledon.

Alcott arguably takes the most satisfaction from the many developments at his home Slam, where the quad wheelchair events were expanded to eight-player knockout draws in 2021.

“There’s something about this place that really embraces wheelchair tennis.

“Hopefully the other Grand Slams follow suit, as well. I think they will. They can see the benefit of it because people want to watch now because it’s such an elite sport.”

Alcott himself can take pride in that evolution, the effervescent Australian demonstrating many times throughout a decorated career that “winning” is measured by far more than his trophy count.

“I just want the sport to keep growing and growing, but I also want people to know their names,” said Alcott, of the players who will follow his path in the sport.

“I fully appreciate I’m the lucky one who people know and things, but I want that to permeate to everybody playing wheelchair tennis.”