As she plots the remainder of her 2021 season, Ash Barty notes the big-picture positives and valuable lessons from her run to the Australian Open quarterfinals. 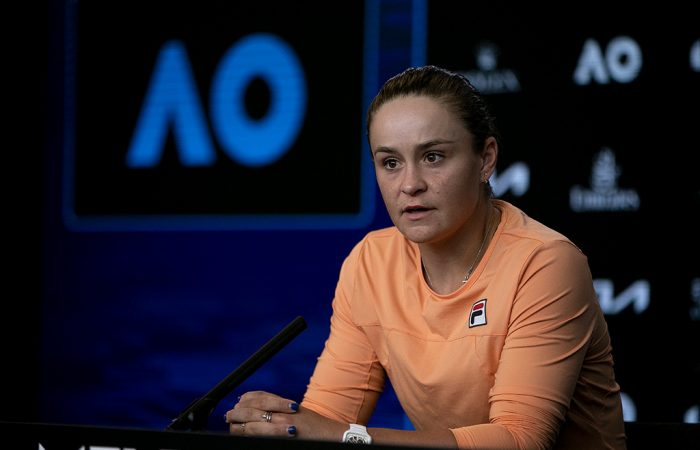 Less than an hour after her Australian Open 2021 campaign ended in a quarterfinal loss to Karolina Muchova, Ash Barty was already processing the lessons.

“Without a doubt it’s disappointing. We learn, we move on, we don’t let it ruin what has been a really successful, enjoyable start to a new season.”

Taking in a ninth career WTA title at the Yarra Valley Classic and progress to a third straight Australian Open quarterfinal without the loss of a set, Barty could indeed be proud of the bigger picture.

Still, the 24-year-old made no secret that the lessons in her quarterfinal loss were difficult.

After emphatically asserting her authority in a 24-minute first set, Barty admitted her control slipped away in the second.

“I felt like I lost my way with overplaying, over-pressing, not letting myself work into the points and really construct points as well as I’d like to,” she conceded.

Everything happens for a reason… Disappointed but we learn and we go back to work!

I love being an Aussie. I love the Aussie Summer 🤍 pic.twitter.com/0SWEz2lx89

Barty refused to be drawn into a discussion of whether a medical timeout from the Czech – who trailed by a set and a break of serve at the time – had impacted her unfairly.

“I don’t write the rules. I abide by them. It’s not my place to comment here whether she had an injury or not,” said Barty, who instead pointed to her own reaction in that situation.

“I tried not to focus on her too much. It’s about going about it the right way for me, the way that I wanted to play the match.”

For now, the focus turns to the positives that Barty and her team can take into the remainder of the 2021 season.

“It’s heartbreaking, of course. But will it deter me, will it ruin the fact we’ve had a really successful start to our season? Absolutely not,” she commented.

“The sun will come up tomorrow. We go about our work again. You’re either winning or your learning. I think today is a massive learning curve for me, for Tyz (coach Craig Tyzzer), my team as well.

That almost certainly means more travel for Barty, who opted to remain at home in Queensland after the disrupted 2020 season resumed last August.

The top-ranked Australian explained she’s currently entered into tournaments in the Middle East – the Qatar Total Open begins in Doha on 1 March, with Dubai starting the following week – and carefully considering her overall schedule.

“The health of my team and myself will always be the priority, no matter what,” she said. “We’ll make the right decisions for the right reasons.”

If there are questions on Barty’s exact travel plans, there are none on the value that the world No.1 takes from her overall Australian summer.

“Being back on the tour has been fantastic. I’ve loved every second, even though at times it is frustrating. That’s the name of the game. That’s the sport that we play,” said Barty.

“I think we celebrate as a team the way that we’ve been able to come back into the sport and really play well.”

A brilliant run is over.