World No.1 Ash Barty continues her impressive run at Australian Open 2021, advancing to the quarterfinals with a straight-sets win over American Shelby Rogers. 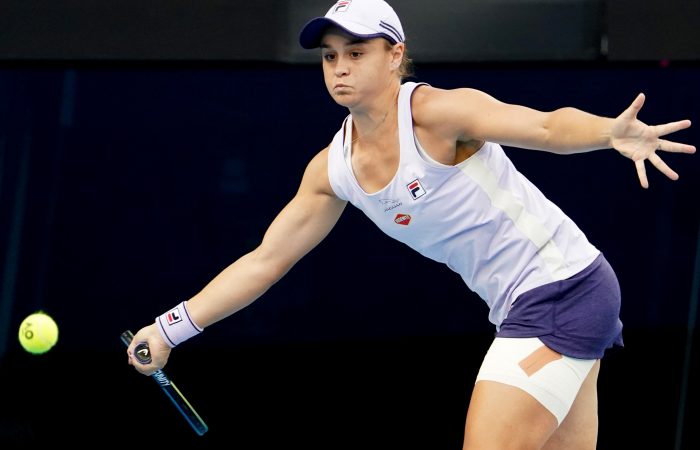 Cool, calm and collected might be a cliche – but it is also an apt description of Ash Barty’s fourth-round performance at Australian Open 2021.

The world No.1 was clinical as she dispatched of world No.57 Shelby Rogers 6-3 6-4 in 71 minutes at Rod Laver Arena this evening.

Barty entered the match wary of the big-hitting Rogers, who pushed her to three sets at the Melbourne Summer Series earlier this month.

But the top-seeded Barty made a brilliant start, firing five winners to the American’s two in the opening 15 minutes and raced ahead 4-1. It set the tone for the match.

“I knew it was going to be vital to serve well tonight. That was something I really wanted to try and focus on, just to try and give myself a chance to be in control of more points,” Barty said.

Tested in the seventh game on serve, Barty weathered Rogers’ attack to hold and extend her lead to 5-2. From there, she closed out a comfortable first set in 29 minutes.

Rogers, who was looking to advance to her third Grand Slam quarterfinal, could not build any momentum.

Ahead 5-1, there was a slight wobble from Barty as she lost three consecutive games. But the Australian didn’t panic and with a break still in hand, served out victory to love.

Barty finished the fourth-round match with 21 winners to Rogers’ 14.

Give us a wave if you're one of the final 🎱@ashbarty | #AO2021 | #AusOpen pic.twitter.com/INZBKY8Tdh

The 24-year-old becomes the first Australian woman to reach three consecutive Australian Open singles quarterfinals since Wendy Turnbull, who made five between 1980 and 1984.

“Obviously it’s exciting to be in another quarterfinal of a Grand Slam, particularly here in Australia,” Barty said.

“The start that we have had so far is really encouraging, but certainly not satisfied with where we’re at at the moment. We will keep chipping away and keep trying to do the right things to progress as far as we can.”

Barty, who is now the only top-20 ranked woman remaining in the top half of the draw, faces Czech No.25 seed Karolina Muchova in the quarterfinals. Barty won their only previous meeting in the US Open third round in 2018.

The final 🎱 is locked and loaded.

Who is your tip to be crowned #AO2021 women's singles champion? 🏆#Kia #MovementThatInspires #KiaTennis pic.twitter.com/ZPJQdQlrPM