The dream of a seventh straight quad wheelchair singles title remains intact for Dylan Alcott, who will face Sam Schroder in the final. 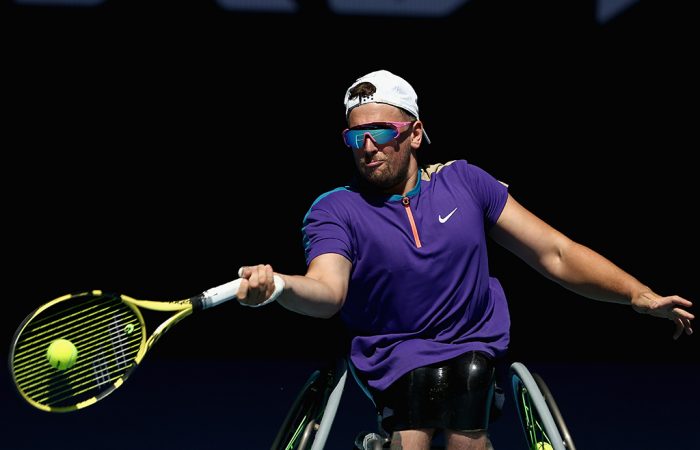 Dylan Alcott will aim to keep an unbeaten Australian Open record alive when he faces Sam Schroder in a seventh straight singles decider in Melbourne.

The world No.1 today defeated Dutch teenager Niels Vink in a semifinal that was far tougher than the 6-4 6-3 score suggested.

“He’s going to be kicking my backside extremely soon,” quipped Alcott, who had to fight his way back from a 2-4 deficit in the 51-minute first-set opener.

“I just want to say a big credit to him its first time on a big court for him like this,” Alcott added.

“He was so good early, and I think was a great showcase of wheelchair tennis.”

After surviving the opener, Alcott also battled through a difficult second set, Vink claiming the first break of serve in the fifth game but unable to consolidate.

The Australian, who converted five of 10 break point opportunities, managed another break in the eighth game and went on to secure victory in an hour and 27 minutes.

A sigh of relief.

Aussie top seed @DylanAlcott is through to the Quad Wheelchair Singles final with a 6-4 6-3 win over Vink.#AusOpen | #AO2021 pic.twitter.com/fFnzPtzCd0

“I think you can tell a bit early my energy wasn’t there and I played a lot better in the back end of the second set because I was bringing that energy,” related Alcott, who makes no secret of his disappointment at the absence of fans as he chases a record of seven straight Australian Open titles.

“I’m just so glad to get through.”

The Australian Open 2021 final will mark a rematch of the 2020 US Open decider, which Schroder – also a Dutch player – seized in a come-from-behind victory.

“I think that was good that that happened because it rejuvenated my hunger,” said Alcott, who went on to claim an 11th Grand Slam singles title at Roland Garros.

With a chance to become the first wheelchair player – in any division – in history to win seven straight Grand Slam singles titles, Alcott is thinking only about delivering his best performance.

“I don’t know how many more I’ve got left in me, so I’m not too worried about the result,” he admitted.

“All I’m worried about is just being the best version of Dylan, out here having fun – and then we’ll see what happens.”

Alcott will also compete for a fourth straight quad wheelchair doubles title, after combining with Heath Davidson to claim a 6-3 7-6(3) victory over Schroder and Vink in the semifinals.

The Australians took one hour and 36 minutes to earn their place in the final.

“I just love playing doubles with Dylan, it’s great being out here with one of my best mates,” said Davidson. “And obviously home Grand Slam, we’d love to win a fourth.”