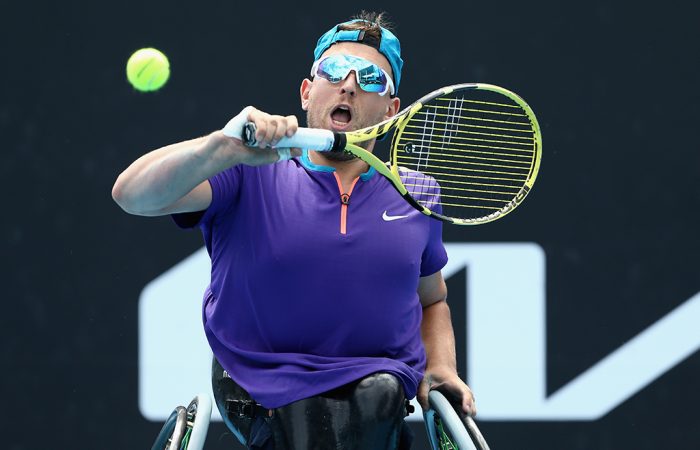 Whether it’s for his Grand Slam-winning tennis career, his multiple media commitments or the busy work of his personal foundation, Dylan Alcott is known for his boundless energy.

So when the world No.1 faced Heath Davidson in the first round of the Australian Open quad wheelchair event without a crowd in attendance, Alcott was only too happy to create his own buzz.

“Being talkative is something that’s very helpful to me, as you probably know. I had to bring my own vibe out there,” Alcott said.

Round 1 in the books. Gees I missed having everyone out there – but happy to get the win.

It was something that Alcott easily managed in the early stages against Davidson.

The Melburnian dominated in every area of the 21-minute first set, hitting 11 winners to Davidson’s three, five fewer errors and a total 26 points to just nine from his countryman.

But with a first service hold in the second set, Davidson also started applying pressure. He broke Alcott’s serve in the next game, the pair trading breaks for four straight games.

Capitalising on seven of the 12 break point opportunities he created, Alcott edged ahead with another break in the seventh game, only to surrender that lead as he served for the match.

Alcott soon steadied, breaking again in the 11th game and after an hour and 13 minutes, calmly serving it out.

It marked Alcott’s 10th straight tour-level win over Davidson, keeping his plans for a seventh straight Australian Open singles title on track ­– not that Alcott himself is thinking so far ahead.

“My expectation of myself is just to be the best version of me every time,” said Alcott.

“I don’t have an expectation to win … as long as I’m going out there, one, having fun, two, playing my game, the results will come.

“I think in the first set I really did that. I don’t even know what I was thinking about in the second set. Wasn’t concentrating enough. Credit to Heath. He played really well in the second set. Just happy to get out of there with a win.”

If there was one negative for Alcott is that it came at the cost of Davidson – both a close friend and a partner, the Australian duo also top seeds in the quad wheelchair doubles event this week.

“It’s also very hard to play one of your best mates. I always struggle with it,” Alcott admitted.

Alcott now meets another “really good mate” in 18-year-old Niels Fink, a 6-0 6-0 winner over Nicholas Taylor in the first round.

“We played each other in a final before the French Open. We both didn’t have coaches. We actually warmed each other up for the final that we were both playing each other in,” said Alcott of the young Dutch player.

“He’s an awesome young guy. I’m really excited about the opportunity to play him.”

Alcott is also excited about the developments at this Australian Open, with the quad wheelchair singles event expanded to an eight-player knockout draw.

“It’s the first Grand Slam to extend the draw. In the quad division it’s knockout, eight players, as it should be. I think you saw by some of the calibre of the matches, there’s great quality players,” he commented.

“There’s something about this place that really embraces wheelchair tennis.”

It’s a sentiment that Alcott, competing with the chance to become the first wheelchair player to win seven straight Grand Slam titles, returns in spades.

“If you are an Australian tennis player and you’re not hungry to win the Australian Open, there’s something seriously wrong with you in terms of your tennis,” he said.

For fellow Australian Ben Weekes, an appearance in the Australian Open wheelchair singles draw was all too short.

Shingo Kuneida, the current world No.1 and a 1o-time singles champion in Australia, took just 59 minutes to claim a 6-0 6-1 win in their first-round match.