A top-100 return is the target for Thanasi Kokkinakis after a confidence-boosting run at Australian Open 2021. 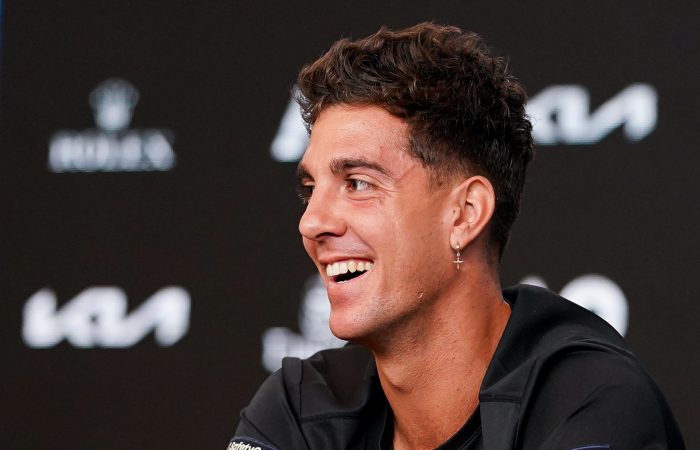 Australia’s Thanasi Kokkinakis is upbeat about his chances of returning to the world’s top 100 this year – and climbing even higher.

Although disappointed after a five-set loss yesterday to world No.6 Stefanos Tsitsipas, the 24-year-old is taking many positives from his best Australian Open result in six years.

“Unfortunately I wasn’t able to get over the line. But I’m not too far off, which is good,” Kokkinakis said.

“Matches like that are why I think if I can just keep getting in better shape physically and keep being able to play matches, there is no reason I can’t be where he is.

“That’s what I’m going for. I’ve got a long way to go, a lot of work to do, but I think (yesterday) proved to me, and a few other people, that I have still got it in me. I’m going to try to use this as motivation and keep kicking forward.”

Man…. I left it all out there and just fell short😔 Thank you everyone for all the support over the last few days, means a lot🙏🏼 Hopefully a big year ahead✊🏼 Congrats to @steftsitsipas pic.twitter.com/yyhmj56TJ3

With confidence restored in his body after a horror stretch with injury and illness, Kokkinakis is determined to keep making physical gains. He plans to complete a training block after the Australian Open, then decide his tournament schedule for the coming months.

“It’s a little bit tricky,” he said of making travel plans. “Obviously this year I don’t want to go overseas and come back with a two-week quarantine. I’ve got to pick my moments, because when I go overseas, I’ve got to be ready to go the whole time.”

Currently ranked No.267, Kokkinakis’ ranking is projected to improve 30 places after his performances this week.

He also still has a protected ranking of No.187 to use for a limited period, although that is unlikely to allow him to enter too many tour-level events.

“I’ll just keep grinding away. If I have to keep playing qualies, I will do that,” Kokkinakis said. “Definitely I think I will prove I belong in main draws, and hopefully other people see that now too.

“Hopefully I can play a lot of matches and build that ranking up to where I think it should be.”

Yet the South Australian, who achieved a career-high ranking of No.69 as a teenager in 2015, is refusing to set a specific ranking target.

“If I’m healthy, the ranking will take care of itself,” he said.

“Obviously my short-term goal is to be top 100 and go from there, because I think I can go a lot higher than that. It’s a lot easier when you’re there (top 100) because then you can kind of pick and choose your schedules and the matches and the tournaments you’re going play from there. That will make my job a lot easier when I get there.”

For now, Kokkinakis’ immediate attention is on an Australian Open first round doubles match with Nick Kyrgios tomorrow. They were due to play on Thursday night, but the match was rescheduled due to rain.

“It’s going to be good fun,” Kokkinakis said. “Doubles with him is always an experience. It’s good playing with a close mate.”

The crowd favourites are sure to have plenty of support too when they take the court at Melbourne Park – an experience that Kokkinakis is relishing this week.

“There was a few times (yesterday) where the crowd erupted and I couldn’t help but have a smile on my face,” he said after playing his first match at Rod Laver Arena in seven years.

“I think you have to kind of take it in and enjoy it … I have missed it after so many years, not just in Australia but also other tournaments around the world I have missed the last few years.”