After winning his first Australian Open main draw singles match in six years, Thanasi Kokkinakis is looking forward to building on this momentum. 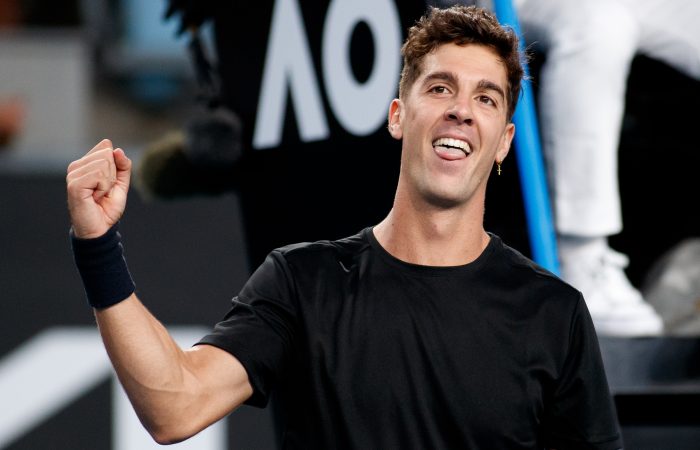 Thanasi Kokkinakis could not hide his emotions after a first-round win at the Australian Open on Tuesday evening.

As he closed in on a straight-sets victory against Korean Soonwoo Kwon, the 24-year-old happily soaked up the crowd support at Crowd 3.

“At 5-0 I felt this massive roar and massive cheer from the crowd,” Kokkinakis related. “I started tearing up, it was a bit of a soft moment.”

Few could argue that such a moment was undeserved.

It had been six long – and difficult – years since the fan favourite had last been in that position at his home Grand Slam.

At Australian Open 2015, on the very same court, an 18-year-old Kokkinakis defeated world No.13 Ernests Gulbis in a five-set thriller that delighted a fervent crowd.

It was the start of a breakout year for Kokkinakis, a wildcard ranked No.147 at the time. Within six months his ranking had soared to No.69 and he was being touted as one of the sport’s most promising prospects.

That mark remains the Australian’s career-high. Since then he’s endured a horror stretch with injuries and illnesses, which has prevented him from building momentum and confidence.

Kokkinakis has shown glimpses of his potential throughout this period. Highlights include representing Australia in Davis Cup and at the Olympic Games, as well as a stunning win against world No.1 Roger Federer at the Miami Open in 2018.

But each time he returned to tour, another setback would follow.

Only those close know the journey….
Grateful I get another chance at this thing🙏🏼 pic.twitter.com/SLxi1EVHNl

“I’ve never actually played a full schedule in my career. The closest I got was when I was 18 and I played three quarters of a schedule,” Kokkinakis related last year.

“I think I’m a better player now than I was then, but haven’t been able to show it.”

The South Australian was hospitalised with severe glandular fever last summer and spent much of 2020 rebuilding his strength and fitness.

His Australian Open win this week was only his second tour-level match since September 2019.

Currently ranked No.267 and without a clothing sponsor, Kokkinakis is taking a pragmatic approach as he looks to reignite his career.

“It’s tough out here, man. It’s not what it used to be,” Kokkinakis said. “That’s alright, blue collar way.”

The Australian wildcard will be firmly back in the spotlight this afternoon when he plays world No.6 Stefanos Tsitsipas at Rod Laver Arena.

“I just can’t wait to get out there,” Kokkinakis said ahead of his first career meeting with the 22-year-old Greek. “I’m hoping there is a decent crowd that can get rowdy.”

Nick Kyrgios, who is teaming up with Kokkinakis in doubles later today, is happy to see his close friend starring at a Grand Slam again.

“He deserves to go out there with the fans and play some of the best players in the world because he belongs there,” Kyrgios said.

Regardless of his results, Kokkinakis has already won by simply being back on the sport’s biggest stage.

“The people around me know the ups and downs, what I have been through mentally just trying to get to the starting line of the tournament and feel like I can compete,” he explained.