Sam Stosur has made a winning start to her 19th Australian Open campaign, defeating Destanee Aiava in an all-Australian first-round showdown. 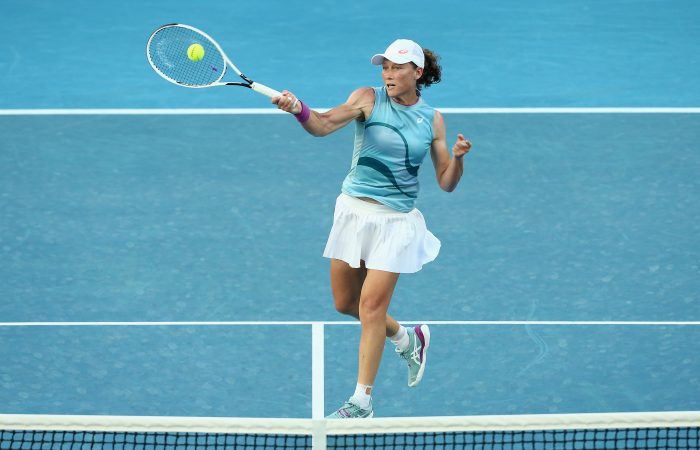 Sam Stosur is back – and winning.

The 36-year-old has made a triumphant Grand Slam return, defeating fellow Australian Destanee Aiava 6-4 6-4 at John Cain Arena this evening.

Stosur, who is contesting only her second tour-level tournament in 11 months, recorded her first singles win at a major since Roland Garros 2019 and snapped a five-match losing streak at the Australian Open that stretches back to 2015.

The US Open 2011 champion was forced to fight hard against the 20-year-old Aiava, who was seeking her first Grand Slam main draw win.

Both players struggled to gain any momentum early in the match.

“There were certainly some ups and downs, and some shots I wish were better, but that’s part and parcel with playing tennis,” Stosur said.

After nine consecutive service breaks, Stosur finally held in the 10th game – sealing the opening set with an ace.

“Thankfully serving for the set I was able to get myself out of a bit of a hole with some good serves,” Stosur said.

As world No.112 Stosur settled into the match, Aiava’s unforced error count grew. A composed Stosur’s experience proved telling as she served out victory after 96 minutes on court.

“I’m really happy to get through tonight’s match,” Stosur said. “Very happy with the way I played and (to be) moving on to the second round for the first time in a while, so it’s exciting for me.”

It is the 93rd Grand Slam main draw singles win of Stosur’s illustrious career and sets up a second-round clash with American Jessica Pegula.

Four Australian women have progressed to the second round at this year’s Australian Open, with Stosur joining Ash Barty, Daria Gavrilova and Ajla Tomljanovic.

World No.1 Barty was ruthless in her opening match, losing only 10 points against Montenegro’s Danka Kovinic at Rod Laver Arena this evening. She faces Gavrilova in the next round.