As he prepares for another Australian Open campaign, Nick Kyrgios recognises the importance of adopting the right mindset when facing challenges. 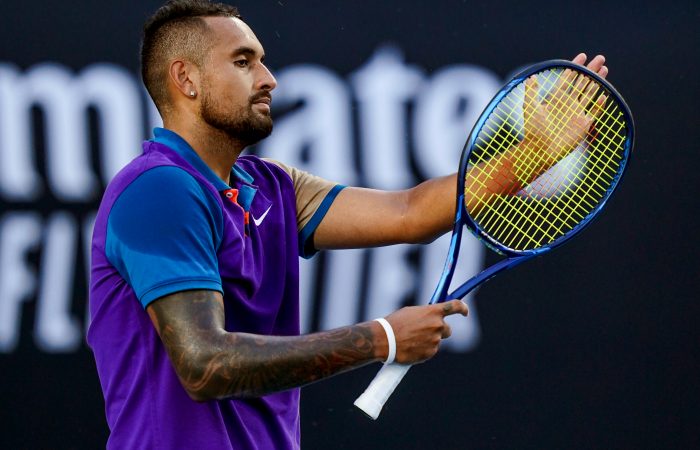 Nick Kyrgios is ready to make his eighth consecutive Australian Open main draw appearance – but the 25-year-old knows this one will feel a little different.

The unpredictable Kyrgios is a crowd favourite at Melbourne Park, filling stadiums whenever he plays. But in the COVID-19 era, this won’t be possible.

The world No.47 experienced the limited crowds at last week’s Melbourne Summer Series, describing it as “a bit odd out there”.

“I usually bring a crowd,” he said, noting a more-subdued atmosphere during his third-round match against world No.25 Borna Coric at 1573 Arena on Friday.

“It feels strange. I don’t think I’m going to experience as good of memories as I have here previously.”

Yet Kyrgios is approaching this new challenge with perspective.

“We’re just lucky to even be playing at the moment,” he admitted.

“At the end of the day it’s a tennis match. With everything going on, it really shouldn’t matter, to be honest. Of course it’s going to be tough. If I’m down two sets to love, I’ve been down like that before and comeback and won. If there’s no crowd that day, I’m probably not going to win. (But) that’s the way it is right now. I can’t complain about it.”

At last year’s Australian Open, Kyrgios advanced to the fourth round. The atmosphere inside John Cain Arena was electric when the Aussie defeated 16th seed Karen Khachanov in a five-set third-round thriller that lasted more than four hours. A capacity crowd at Rod Laver Arena also witnessed his fourth-round showdown against world No.1 Rafael Nadal.

“Last year when I played Khachanov and Nadal, every single person in the stadium was going nuts,” recalled Kyrgios, who earned widespread praise for his support of the Aces for Bushfire Relief campaign last summer.

The No.3-ranked Australian man begins his 2021 campaign against 25-year-old Portuguese qualifier Frederico Ferreira Silva. It is his first career meeting with the left-handed world No.184, who is making his Grand Slam main draw debut.

They play their opening-round match this evening at John Cain Arena, which is famously Kyrgios’ favourite court at Melbourne Park.

“I don’t care who I play in the draw,” Kyrgios noted ahead of Friday’s draw ceremony. “I could draw anybody, I’m going to go about it the same way … I’m going to try to serve big, play big, find my rhythm. If I execute well, usually I win.”

Kyrgios’ level of self-assurance is promising, especially as he enters the tournament having only completed three tour-level matches in the past year.

“It’s not like a tap,” Kyrgios admitted of building match fitness. “(But) I thought I did everything I could this week. I won a couple matches. I had a lot of court time. I practised every day, as well. I think I’m ticking the boxes. I think I’m giving myself a chance.”

Kyrgios has also brushed off concerns about a left knee injury that impacted him during his third-round run at the Murray River Open.

“I was expecting my body to not feel great, to be honest. I’m not at all scared or anything that I won’t play or anything like that,” he said. “I’m just going to maintain my body now.”

An increased self-awareness of how to produce his best tennis also bodes well for Kyrgios’ Australian Open chances.

“I actually feel good,” Kyrgios said of his form. “I mean, I know mentally for me it’s more important than anything. If I’m positive, I’m motivated, I’m sure I’ll play some good tennis.”

> READ: Nine Aussies in action of day one of Australian Open 2021