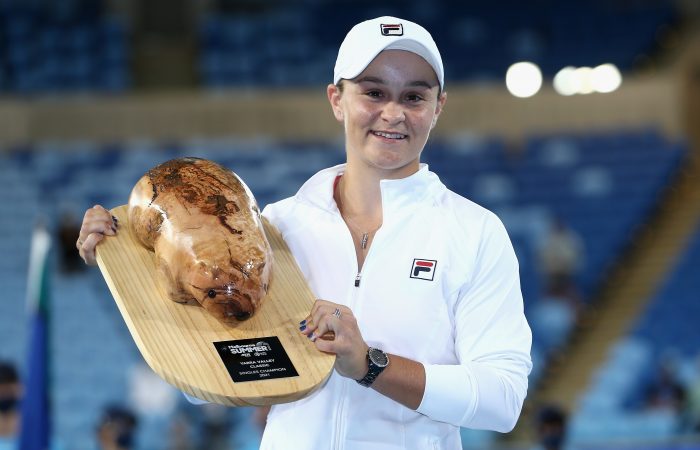 The world No.1 secured the Yarra Valley Classic title today with a 7-6(3) 6-4 victory over world No.15 Garbine Muguruza at Margaret Court Arena.

Barty, contesting her first tournament in 11 months, produced her best tennis of the week to subdue the in-form Spaniard. The top-seeded Barty fired 11 aces and won 77 per cent of points on her first serve.

“It’s been a little while between drinks for us, but it’s certainly nice to be back out here,” Barty said after winning her first title since last January’s Adelaide International. “I’m enjoying absolutely every second.”

Muguruza, who had only dropped 10 games in four matches to advance to the final, started strongly and served for the opening set at 5-4.

However, Barty refused to let the former world No.1 dictate. Mixing pace with poise, Barty was able to control the rhythm of the match.

“Garbine is an exceptional front runner,” Barty noted. “It was important for me today when she did get a couple of those early breaks in the first set, to not to let her run away with it.”

After dominating the opening set tiebreak, Barty maintained her momentum to edge ahead 3-1 in the second set.

Muguruza kept fighting and broke back in the sixth game – but Barty broke again in the ninth game and then comfortably served out victory after one hour and 47 minutes on court. She finished with 28 winners to Muguruza’s 14.

“I think that’s a positive thing, is that every challenge that was thrown at me this week, we were able to find a way through, find a way to problem solve,” Barty said.

“In an individual sport, when it’s a one-on-one, you’re trying in a way to play chess, out move your opponent. I think for me that’s something I really enjoy about tennis. It’s certainly very nice to be back testing myself against the best in the world.”

In thanking the crowd, Barty acknowledged how special it was to be competing in front of fans again.

“For us, this is what makes the magic happen,” she said. “To all of the Melburnians here, I feel for you guys. You’ve had an exceptionally tough six or seven months. I have a lot of friends and family down here, so I feel for you. But I’m so happy and grateful that you guys can be here with us at the moment, making it extra special for us.”

Barty now turns her attention to next week’s Australian Open, where she plays world No.77 Danka Kovinic of Montenegro in the opening round on Tuesday.

“For me, I go into this Australian Open excited, well-prepared, ready to play. Then we just see what happens come that first match,” Barty said. “We focus on that first match, try to do the best that we can, then we go from there.”