Jordan Thompson, Dane Sweeny and Matt Ebden continue an Aussie charge at the Great Ocean Road Open, with six locals progressing to the second round. 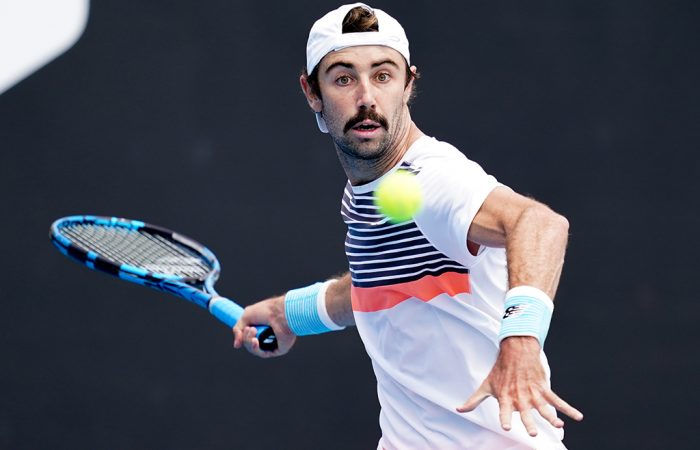 If there was ever a doubt in the merits of the “no place like home” adage, Australian players have eliminated it with some dominant performances in the Great Ocean Road Open today.

Of the nine local men who started at the ATP 250 tournament, six men have progressed to the second round.

And alongside milestone victories, there were spirited ones for the impassioned locals, with Dane Sweeny, Jordan Thompson and Matt Ebden all overcoming difficult opponents or circumstances to continue their progress on day two.

No player showed more determination than Sweeny, who recovered from service breaks in both sets to defeat Korean Ji Sung Nam 7-6(4) 7-5 and secure his first ATP main draw win.

“This month’s been pretty crazy. It’s been one of the best experiences of my tennis career so far,” Sweeny said.

The 19-year-old from Queensland, ranked world No.797 compared to No.273 Nam, took confidence from recent progress to the final round of Australian Open qualifying.

“It definitely helped me today get through a lot of adversity, especially when I was down on the scoreboard, just to keep my cool,” he told tennis.com.au

The recent addition of Mark Draper as coach also helped Sweeny summon the composure and aggression required to overcome the more experienced Nam.

After trailing 2-5 in the first set, the Australian stormed back to claim the opener in a tiebreak.

He was similarly resolved after dropping serve in the first game of the second set, pouncing on break point opportunities as Nam served to level at 5-4.

The Australian broke and consolidated to complete his milestone victory in just under two hours.

“He played well, serving good but when it got in the pressure situations, he kind of let me off the hook a bit,” Sweeny reasoned.

“It enabled me to get back in the sets and I just tried to keep composed, because I knew I would get an opportunity and when the opportunities came, thankfully I took them.”

Competing in swirly conditions at 1573 Arena, Thompson was similarly steadfast as he levelled after a tight first set against world No.93 Gianluca Mager.

Dropping serve in the fifth game marked the only break point the Australian surrendered, Thompson saving two more in the two-hour match.

Thompson secured the second set with his first break of serve in the 10th game, converting another in the eighth game of the third. He quickly backed up to book a second-round meeting with Pierre-Hugues Herbert.

“I don’t think I did much wrong when I was out there,” said Thompson. “I played one bad service game. That’s the only time I got broken in the match.”

The 26-year-old returns to Melbourne after navigating pandemic-related challenges to record a successful season – both factors combining to provide a newfound appreciation for his time on tour.

“I don’t mind at hotels, just going to the courts and then going back to the hotel. It doesn’t really faze me,” Thompson admitted.

“But then when the option got pulled for me not being able to like go to restaurants and stuff, I didn’t realise how much I loved that.”

Matt Ebden is also embracing his return to the court.

With his ranking dipped to No.320, the 33-year-old was a late entrant as an alternate after Damir Dzhumur’s withdrawal.

But taking an efficient 93 minutes to record a 6-3 7-6(6) victory over 77th-ranked Federico Delbonis, the West Australian showed he still belongs among the game’s elite.

“Delbonis is quality opposition … and, like me, he’s been in the top 40. We both know each other pretty well, and yeah, I would hope on the hard court I would be a favourite to beat him,” Ebden related.

“But yeah, I was just happy it played out the way I thought it should.”

Ebden is happy too to be among the contingent of Australians making progress in Melbourne.

“Obviously Aussie boys are doing well at home (and) I’m one of them now, so it’s great. I feel very comfortable out there,” he said.

And while there were losses today for John-Patrick Smith, Tristan Schoolkate and Thomas Fancutt, Sweeny appreciates how the locals can feed off each other’s overall success.

“I think it just builds some momentum to be honest. It gives me belief because I train with a few of those guys that are doing well,” he said.

“If they’re doing well is no reason I can’t do well, and all the other Aussies can’t do well. The belief thing is pretty motivating in itself.”