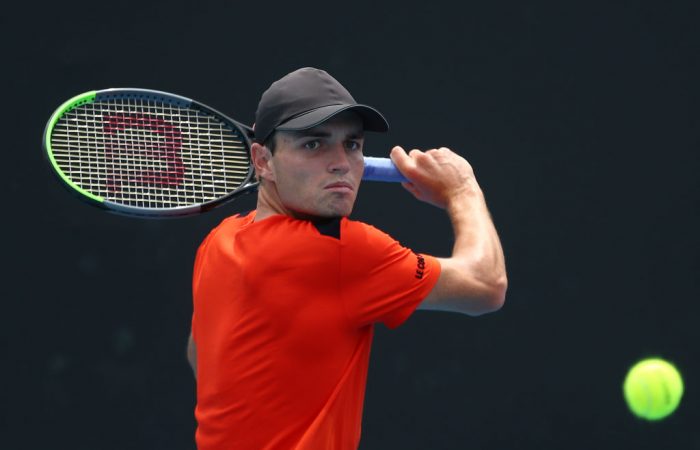 It was a day of breakthroughs for Australian men at the Great Ocean Road Open, as Aleskander Vukic, Chris O’Connell and Max Purcell each progressed to the second round.

While Vukic and Purcell secured their first wins in an ATP-level tournament, O’Connell claimed the biggest scalp of his career.

But the milestones barely registered for the all-business trio – with so few opportunities to compete in the pandemic-impacted era, the Australians were instead simply grateful to be on court.

“It honestly just feels good to be competing,” said the 195th-ranked Vukic, who opened an impressive day for local men with a 6-4 7-5 victory over Yen-Hsun Lu of Chinese Taipei.

“Leading it up to it, it didn’t feel like everything was starting. So honestly it was kind of good, everything just felt like a normal match and when I won, I was just happy to win a match.

“I didn’t really think about the occasion. It’s nice to win. It’s been a few months since we’ve all played, so it was just good to get back to those ways.”

There was similar sentiment from the 120th-ranked Chris O’Connell, who defeated world No.68 Dominik Koepfer 5-7 6-4 6-1 for his first career win against a top-80 opponent.

“I had no idea,” smiled the 26-year-old. “(I was mostly pleased) firstly about just being out on court. I’m super pumped to be back out there.”

Similarly, Purcell was thinking more about the opportunity to continue his singles progress than the breakthrough win.

“I’d thought about it but it’s just another match. I’m not really too bothered by it,” said the 22-year-old, who defeated Norbert Gombos of Slovakia 6-4 6-4.

“I mean singles matches these days are so few and far between with the limited tournaments and how hard travel is so I’m not taking it like that.”

The challenges that the Australians have recently overcome helped the composure they each displayed.

Vukic, whose arrival into Melbourne was delayed by border closures between Victoria and New South Wales, stamped his authority with breaks of the Lu serve in the opening game of each set.

But serving for the match at 6-5 in the second set, the Australian worked hard to save two break points, eventually securing victory on his third match point.

“The way I played the match, I made it quite difficult for myself,” he admitted. “I took care of most of the things that I needed to take care of. Served (well) most of the time. Played some good return games.

“For the most part, it was quite good. There were just a few sloppy games, but I think that’s normal when you don’t play for this long.”

O’Connell was also impacted by recent border closures, adding to the Australian’s determination to stay the course after the German claimed the first set.

“I started off a bit slow, maybe a bit of nerves, a little bit rusty but that’s to be expected first match of the year. I’m just happy to come from a set down and win the match,” said the 26-year-old, whose previous best win was over world No.81 Laslo Djere in the US Open last year.

A 78-minute win for Purcell, meanwhile, was helped by the support of coach Nathan Healy. After suffering a serious wrist burn, Healy was unable to travel to Doha with Purcell for Australian Open qualifying.

“It was good to have a singles match with my coach down here. I play best when he’s here,” said Purcell, who converted two of four break point opportunities, saved two of his own and completed the win with his ninth ace.

The challenges continue for each Australian, with each facing seeded opponents in the next round. Vukic meets No.4 seed Jannik Sinner, O’Connell takes on No.8 Alexander Bublik, while Purcell has a daunting assignment against No.2 Karen Khachanov.

But it’s opportunity, not obstacles, that are most front of mind.  “I’ve got nothing to lose,” said Purcell of his match against Khachanov. “It’s all on him.”

Thrilled with each other’s progress, the Australians continue with a spirit of support.  “It’s awesome when there’s a good group of Australian guys coming through together,” said O’Connell.

“We’re training with each other all the time, so we’re pushing each other … it’s a good feeling.

“I can’t wait to get out there again.”