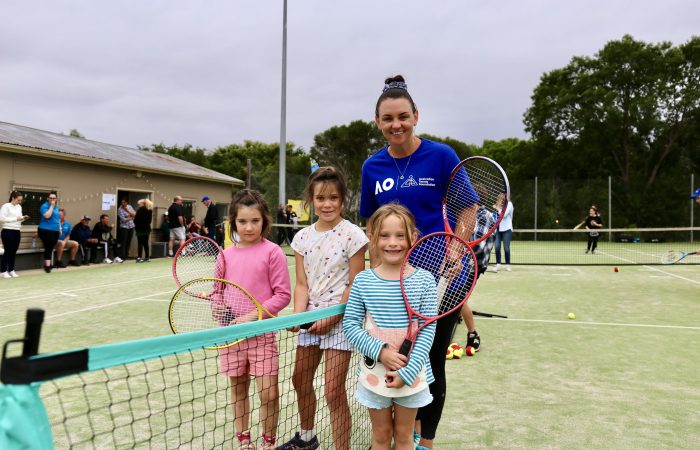 The power of tennis to unite communities was heart-warmingly on display at Australian Open 2020.

Many of the world’s best players contributed to Tennis Australia’s Aces for Bushfire Relief initiative, helping raise more than $6 million for Australians impacted by some of the worst bushfires in national history.

Local communities continue to benefit from this generosity, with the Australian Tennis Foundation helping distribute funds through the Rally as One program.

Members of the clubs impacted on Kangaroo Island related the difficult experiences of that period.

“I think every member of our tennis club has been affected by fire in one way or another,” said Marina Gregor of the Stokes Bay Tennis Club. “It’s taken out livestock, fences, homes, cars – you name it, it’s gone.”

“The focus, island-wide, was to get the kids playing sport again. Just (to give them) that sense of normality.”

Supporting community events, year-round tennis programs and creating leadership opportunities for youth are also priorities of the Rally as One program.

“We’ve designed Rally as One to help communities come together, celebrate community spirit and promote social cohesion, knowing they have the support of the entire global tennis community.”

Rally for One continued with visits to Yeppoon in Queensland, Cobargo in New South Wales and Mallacoota in Victoria in late 2020.

As he joined a team planting greenery at Cobargo, Fitzgerald noted the symbolism of new growth and was heartened by the obvious sense of unity.

“It’s obvious that the community has been rallying together,” said the former Australian Davis Cup captain. “And sometimes they need to know that outsiders are thinking of them a little bit too.”

More Rally as one community events are planned for 2021. As the Australian Tennis Foundation supports these resilient communities, Tennis Australia’s charity arm continues to inspire brighter futures through tennis too.