Daria Gavrilova is through to the second round at the Yarra Valley Classic, where she’ll meet 23-time Grand Slam champion Serena Williams. 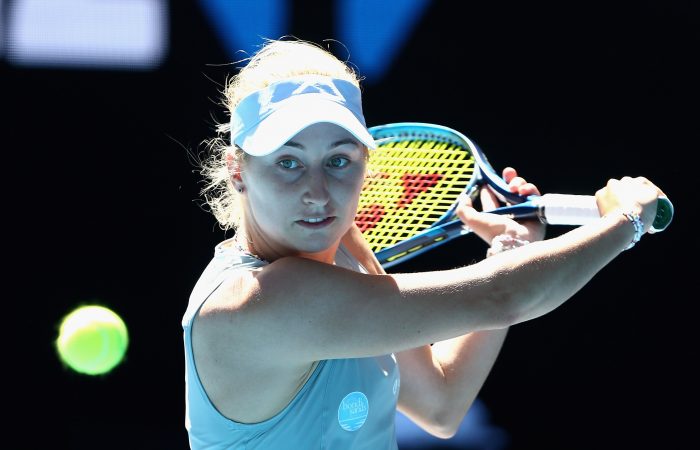 Australia’s Daria Gavrilova has begun her season in style, advancing to the second round of the Yarra Valley Classic at Melbourne Park.

Gavrilova was outstanding in a 6-2 6-0 win against world No.98 Viktoria Kuzmova at Margaret Court Arena today.

“I played really well. I was pretty happy with my serve,” Gavrilova said after recording victory in 65 minutes.

“I never used to get free points off my serve and today I did. I felt like my second serve was really good, I was able to mix it up well.”

The No.451-ranked wildcard, contesting only her third tour-level event in a comeback from a 12-month injury lay-off, proved she’s one to watch in 2021.

Gavrilova, who has been successfully managing ongoing Achilles tendonitis and plantar fasciitis, is thrilled with her improved fitness too.

“Not having modified training brings me so much joy,” she said. “I’m feeling like I can sprint to any ball. Not being scared gives me confidence.”

This bodes well for her second-round clash with fifth seed Serena Williams. Williams, who is currently ranked No.11, leads their head-to-head record 3-0.

“I think she’s the greatest,” Gavrilova said of her next opponent. “I grew up watching Serena and Venus.”

Gavrilova and world No.1 Ash Barty, who had a first-round bye, are the final two Australian women in the Yarra Valley Classic singles draw.

Sam Stosur’s comeback ended in a straight-sets loss to 16th seed Marie Bouzkova, while Kimberly Birrell was unable to capitalise on an early lead in her clash with German Mona Barthel. Maddison Inglis and Lizette Cabrera also lost in the opening round.

There was better news for Barty, who scored her first win of the summer in doubles with American Jennifer Brady.