Thousands of kids are becoming Australian Open stars in their own right, thanks to the AO Holiday Program that’s being delivered at clubs throughout Australia. 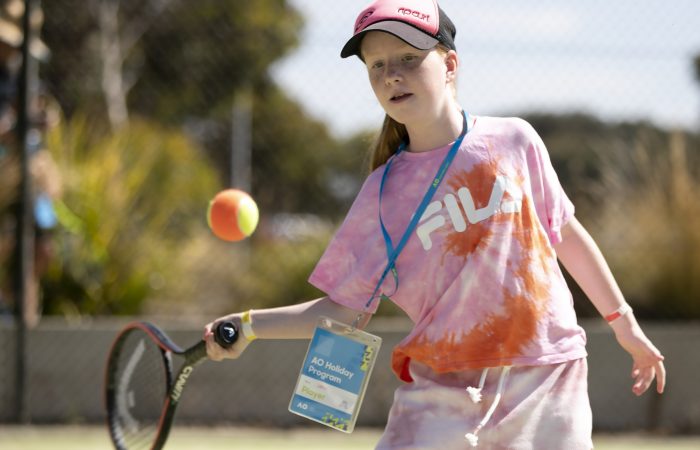 This year’s Australian Open has expanded across the nation like never before – especially among the kids.

Over the past several weeks, tens of thousands of Aussie kids have gleefully become Grand Slam stars in their own right, thanks to Tennis Australia’s AO Holiday Program.

“It’s the first time we’ve kind of gone out and used the halo of the Australian Open to help promote coaches’ holiday programs, and also add to the experience,” says Rohan Obst, the National Program Manager at Tennis Australia.

Running to the end of the summer school holidays, clubs across the country have been welcoming children, whose ages range from five to early teens, to participate in the fun, super-active program.

Even better than getting out of the house? It comes with plenty of swag to match.

Participants receive an AO lanyard, an AO Holiday Program player accreditation and an activity booklet with tennis-themed activities. They also receive an end-of-program certificate and a Dunlop ball.

“We’re using the AO to inspire kids in their local community and bring a bit of the magic of the AO into these programs,” Obst explains.

And it’s been a roaring success.

“It’s been absolutely brilliant,” says Wayne Fielder, coach at Baseline Tennis in Cairns. “The kids have loved it. They love the little extras that come with it and all that sort of stuff.”

“We received a huge amount of giveaways which the kids love,” adds Yvonne Fantin, head coach at Topseed Tennis Academy in Melbourne’s north.

“So I think it’s been a good way that Tennis Australia has supported us as coaches, to be able to run something at our own clubs, which has been really good.”

Each club puts their own unique stamp on the program.

“We split our day into segments and we do two segments of tennis,” explains Fielder, who operates all-day and half-day programs out of the Cairns International Tennis Centre.

“We’re professional tennis coaches, that’s what we do well … but we just tried to come up with a completely different philosophy, a different way of thinking. Mix some other activities and sports in there.

“The focus is on getting the kids out of home, out from under their parents’ feet and getting them off their iPads and phones – doing a variety of stuff.”

Not only is it delighting tennis-playing children, it’s attracting newcomers to the sport too.

“Of all the kids that we’ve got in the AO Holiday Program, probably 30 to 40 per cent of them were not previously in our coaching program,” Fielder explains. “This whole program is, one, giving us more revenue as coaches; two, it’s keeping kids active; three, I think it’s a great opportunity to actually generate new kids into the term-time program.”

It’s been a similar experience for Fantin in Melbourne.

“A lot of parents have contacted me and said, ‘We don’t play tennis, but we’re really interested.’ I think that the holiday program was a good start and I’ve already signed those kids up now to start playing tennis in term one,” she says.

Fantin also believes that the sport has developed a new appeal in the climate of COVID-19.

“I’ve noticed a lot of the kids that were new that attended the program, they were doing other sports last year. Larger format sports, like soccer and football, and contact sports, and I think a lot of parents are looking at tennis as maybe a safer option.

“So I think we’re also attracting players from other sports whose parents are looking for them to do something else now.”

Clubs and coaches have also benefited from the program’s boost, following a difficult year of closures due to the pandemic.

“Coaching programs will get their big influx of kids for the year in January during their summer of tennis. What the program has done is, it’s got people excited about the Australian Open.

“I feel like this whole initiative with the Australian Open awareness has got us all a bit excited about the tournament that’s coming.”

And the excitement is clear, especially looking at clubs’ social media, where kids take on the personas of their favourite tennis players, and even show off their emceeing skills.

After asking a young man to introduce the players at their club in West Lalor, Fantin was delighted when the boy chose to improvise his new-found role.

“I gave him a script and he said, ‘Yvonne, do you mind if I don’t go by the script and I make it up myself?’ And I’m like, ‘Yeah, okay!’ So he actually came up with that whole thing himself,” she explains.

“Having match play incorporated into the holiday program gave kids a chance to compete in some way because I think that they’ve really missed that as well. And even just interacting with other kids, all said they had a fantastic time, just hanging out with their friends.”

For more information, check the list of clubs and coaches who are delivering the AO Holiday Program.