The global tennis community is mourning the passing of esteemed coach Bob Brett, who guided numerous Grand Slam champions in a life-changing journey in the sport. 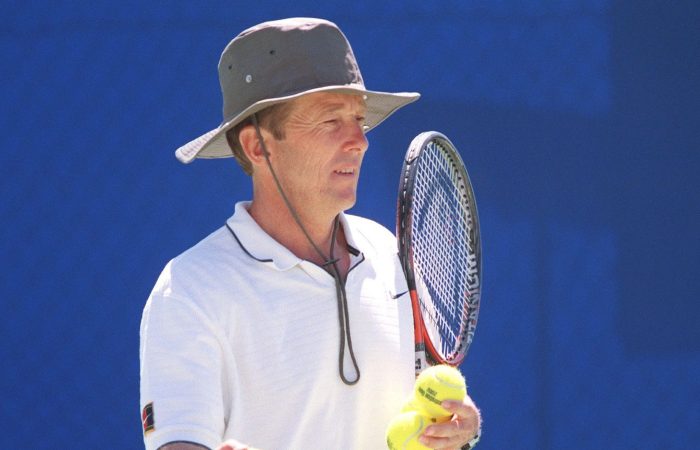 The global tennis community is mourning the passing of Bob Brett – an Australian coach who mentored champions in a humble and generous way that drew widespread admiration.

“Bob Brett’s passing is a great loss to tennis,” said Tennis Australia CEO Craig Tiley of Brett, who was age 67 when he lost his cancer battle.

“He was an exceptional coach and widely admired. Bob guided all level of players to success – from Grand Slam champions to those starting out in the sport he loved so dearly.

“My sincere thoughts are with (daughters) Caroline and Katarina and Bob’s extended family and friends.”

“(He was) someone who ‘was’ tennis,” Fitzgerald said. “He was moulded by the likes of the great Harry Hopman and Stan Nichols, where he learnt the ropes on a genuine journey to become a coach who could make a life-changing difference to his players – on and off the court.”

“An Australian first but a man of the world, he wanted the history of tennis to not just survive but to prosper and he wanted the same for his charges,” Fitzgerald related.

“A quietly spoken man who had your attention whenever he gave his advice, he was someone who first and foremost, wanted to help young players be better – and help them become better people.

“What a good man, and what a great legacy he has left.”

A legendary coach and beloved figure in our sport.

Paul McNamee, one of the many tennis champions to benefit from Brett’s guidance, said his fellow Australian will be deeply missed.

“Bob Brett leaves a big hole. He was a super coach and great bloke, a true blue Aussie who never changed. He is a legend at Hopman’s Tennis Academy, where he helped countless players, including Peter McNamara and I, so much, and coached us both on tour for a while,” McNamee said.

“He’s an unsung hero, up there with the great Australian male coaches like Mr Hopman, Barry Phillips Moore, Tony Roche and Darren Cahill. My thoughts with his daughters and extended family.”

One of Brett’s best-known charges was Goran Ivanisevic – who once said that while he taught him on the court, “Bob taught me a lot of things off the court that made me a better person in my life, and he remained a great friend.”

Among the champions Brett led, the best known are Boris Becker, Johan Kriek and Marin Cilic – but his influence spread far beyond the Grand Slam winners, through decades of work with players across the globe.

Despite his high-profile successes, he was happiest in the background, once describing his role: “As a coach you can guide them, you can give them examples and talk about history, but in the end it is just bringing out the qualities that they have. The coach is responsible for losses and the player is responsible for the victories.”

I was just starting out as a coach and he was my star – one of the best coaches in the world.
⁣
He trusted me, believed in me, took me under his wings and taught me the job. He was my mentor and I can’t thank him enough.⁣

Brett grew up in Melbourne during Australia’s golden era of tennis in the 1950s and 60s and began coaching in the 1970s. He drew on the tradition of hard work, but added layers of technical expertise and positive reinforcement. He saw his role as a friend, not a tyrant.

“To be a coach you need to have a passion for the game and a love for teaching the game because without those things the coach will not give those extra things, the little conversations at the end of the day and this is what makes the player enjoy the game that bit extra,” he said.

“The coach needs to enjoy the journey that they are taking with any player.”

Brett started working with Becker in November 1987, and over the next three years the German became world No.1 and won Wimbledon, US and Australian Open titles.

Bob Brett was undoubtedly one of the best coaches in the world however he was much more than a tennis coach. He had a sixth sense about how to reach each player right where they were and make them better players and better people. My deepest condolences to Bob’s family.

Players sought out his expertise, including Cilic who travelled as a teenager to San Remo in Italy where Brett had set up a tennis academy. He spent months of every year coaching in Japan and was a high-performance consultant in Canada and to the British Lawn Tennis Association.

Throughout it all, he never lost the joy of working with players at all levels.

“In coaching you need to learn to work with many different people,” he once reflected. “That improves your teaching ability. It is experience. It isn’t reading a book or watching on TV, it is building the game.”

Underlining the respect that he’d garnered in a 46-year coaching career, Brett was unanimously voted by peers as the recipient of the ATP’s Tim Gullikson Career Coach Award in November last year. The award is given to a coach who exemplified excellence, leadership, respect and a true love for the sport of tennis and the art of coaching.

McNamee noted that Brett’s passion for coaching was always clear.

“Brettie, even as a young guy, dreamed to be a coach rather than a player,” he related. “He was a disciple and devotee of Mr Hopman, in my opinion the son Mr Hopman never had.”

Bob Brett was one of those people who could put a smile on your face without saying a word. Always had great energy ! Thinking of his family today❤️ RIP Bob

I am so sad to hear the news of the passing of Bob Brett. A humble, wonderful guy and great tennis coach. RIP Bob.

Very saddened to hear of Bob Brett’s passing, outstanding individual who gave so much to so many. Loved traveling the globe talking every facet of the tennis world with Bob. A passionate caring individual. Thoughts with the Brett family.