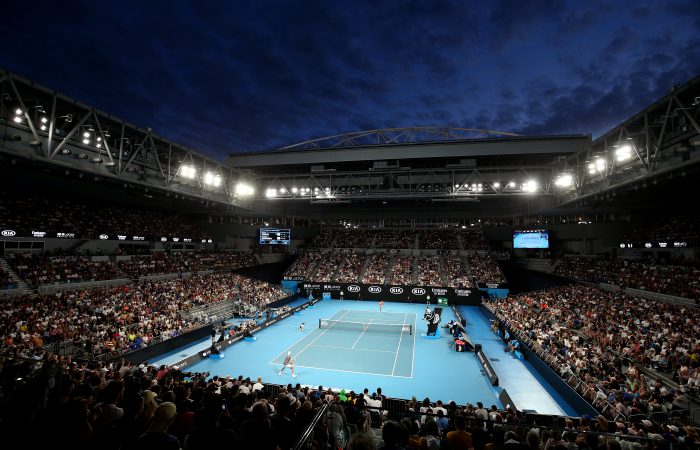 The John Cain Arena (JCA) zone will be where the spirit of the ‘Happy Slam’ comes to life as well as providing fans with the best value tickets for Australian Open 2021.

Tickets for the JCA zone (formerly Melbourne Arena) will replace the popular Australian Open ground pass for 2021, with prices starting from the AO 2020 ground pass cost of $49 for weekdays, $59 for weekends and $39 for children and concessions.

The Australian Open has a new game plan to ensure the safety of everyone onsite this year. The precinct is divided into three zones, each including one of the three major arenas.

Each zone offers its own unique combination of world-class tennis action, live experiences and the culinary offerings for which Melbourne is renowned.

The John Cain Arena zone will include JCA, more match action on two eastern courts, while fans can also see the stars warming up at the Practice Village and wine and dine within a slice of Grand Slam Oval.

“John Cain Arena has hosted some enthralling battles over the years and is a favourite destination for both fans and players,” said Australian Open Tournament Director Craig Tiley.

“As part of our planning to ensure safety for everyone, all fans will require a ticket which includes a stadium seat in one of the three zones, and which also allows access to great food, music and other activations within their specific zone.

“We’ve worked hard to ensure the AO is still as accessible as possible, and by providing access to JCA and the JCA zone for ground pass prices is a bonus for fans.

“Some of the most memorable matches of the tournament are played on this court and fans will be able to enjoy some spectacular tennis this summer.”

Australia’s Nick Kyrgios is renowned for requesting to play at John Cain Arena, famously dubbed “the people’s court”, and thrives on the energy of enthusiastic fan support.

A highlight of AO 2020 was Kyrgios defeating highly regarded Russian Karen Khachanov in a five-set thriller on his favourite court in four hours and 26 minutes.

“This is probably my favourite court in the world, I always play here early on … I just feel super comfortable,” Nick Kyrgios said during AO 2020. “You guys (talking to the crowd) are the best – I can feel the support.”

John Cain Arena was also the scene for former champion Caroline Wozniacki’s emotional farewell to the Australian Open and her tennis career, retiring from the sport last January following her third-round loss to Ons Jabeur.

“These are the special memories that I will always cherish,” a tearful Wozniacki said after her final match.

In 2019 on the same court, Andy Murray showed the grit and determination he is famed for as he fought through the pain of what at the time seemed like a career-ending hip injury, losing in five sets to Spain’s Roberto Bautista Agut.

Other classic matches on JCA over the years include one for the record books – in 2011, in the longest ever Australian Open women’s match, Russia’s Svetlana Kuznetsova took four hours and 44 minutes to defeat Italy’s Francesca Schiavone.

John Cain Arena is in operation from days one to eight at Australian Open 2021.

As part of the Australian Open’s COVIDSafe plan, tickets will be sold in family ‘pods’ of between one to six tickets to assist with physical distancing. All tickets will be digital to minimise touchpoints and assist with contact tracing, and stadium start times will be staggered, with RLA and MCA sessions commencing at 11 am, and JCA at noon.

Ticket prices have been frozen or reduced in many categories for 2021 which takes into account the change in access to different areas onsite.

Tickets are available for purchase now via ticketmaster.com.au