Tennis legend John Fitzgerald headed to Mallacoota for Rally as One

The Australian Open and Australian Tennis Foundation’s national Rally as One initiative continues with a visit to the Victorian town of Mallacoota. 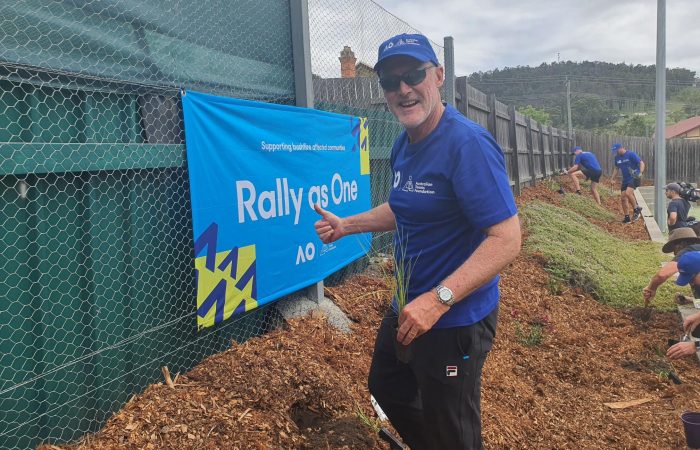 Australian tennis great John Fitzgerald will visit Mallacoota today and Saturday as part of the Australian Open and Australian Tennis Foundation’s national Rally as One initiative.

Rally as One was launched in November to support bushfire-affected communities. It comes after the global tennis community united to raise more than $6 million in January as part of the Australian Open’s Aces for Bushfire Relief initiative.

The funds raised will be used to help rebuild vital infrastructure in some of the areas worst affected by the bushfires in January, as well as deliver programs to support families and build resilience in kids.

“It was heartbreaking to see so many communities devastated by the bushfires that swept across the country in January,” Australian Tennis Foundation Executive Director Vicki Reid said.

“Rebuilding homes and community infrastructure is a long and difficult road and we wish to support the people in the community during this time. We’ve designed Rally as One to help communities come together, celebrate community spirit and promote social cohesion, knowing they have the support of the entire global tennis community.”

Mallacoota was one of the hardest hit in Victoria during the 2019/2020 bushfire season. The popular tourist destination was devastated by 10 different fires that spread across approximately 200,000 hectares of the region, leaving 4000 visitors and 1000 local stranded at the popular summer tourist destination. Over a three-week period nearly 120 structures were lost in the area, including close to 100 homes and tragically two people lost their life.

Many locals are still living in temporary arrangements and continue to deal with permanent and life-changing losses, all of which affect the wellbeing of the whole community. Rebuilding is not only focused on the physical losses experienced by so many, but also the emotional impact the devastating fires have had on mental health across the region.

Rallying as one.@caseydellacqua and John Fitzgerald show the power of tennis to unite and make a difference. The Aussie duo stopped in at Cobargo, NSW, to help the community continue their recovery from devastating bushfires #AusOpen #RallyAsOne pic.twitter.com/vlRlK3vbog

As part of Rally as One, ‘Fitzy’ will join with the community today at the Mallacoota Tennis Club for an evening of social tennis, ANZ Tennis Hot Shots, raffles, giveaways and more.

The social activities continue on Saturday morning with a complimentary brunch and coffee to keep players fueled as they hit the courts.

Tennis Australia and Beyond Blue have joined forces to promote good mental health and wellbeing on – and beyond – the court. As part of this, a NewAccess Coach will be available during the two events to provide information on the NewAccess program developed by Beyond Blue. NewAccess is a free and confidential mental health support program available to people 18 years and over in the Gippsland region.

> Learn more about the Beyond Blue NewAccess program

“I am so proud of the way the tennis community has rallied together to support regional areas that have been affected by these devastating events. Tennis is at the heart of so many communities, so it’s important that we continue to support the local businesses and towns,” Fitzgerald said.

“I’m looking forward to visiting Mallacoota and meeting members of the community to hear their stories.”

Since the start of November, Rally as One has already visited Kangaroo Island (South Australia), Yeppoon (Queensland) and most recently Cobargo (New South Wales) on Wednesday to support the rebuild of community tennis clubs, drop off racquets to local students, hold community events and encourage more people to play tennis.