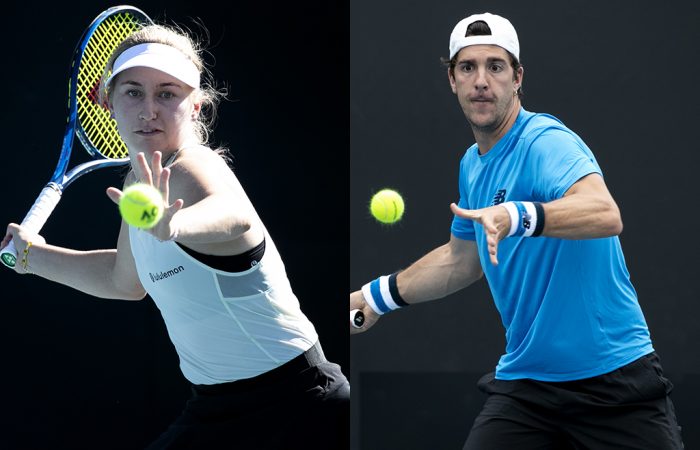 The top-seeded Gavrilova scored a 7-5 6-4 win against Storm Sanders in the women’s final, with Kokkinakis powering past Blake Mott 6-4 6-1 to secure the men’s title.

It is Gavrilova’s first singles title in more than three years and the former world No.20 could not be happier.

“It’s always nice to win a title,” said the 26-year-old Gavrilova, who was playing only her third tournament in a comeback from a 12-month injury lay-off.

“It was really hot today and it’s always tough to play a friend, but I think we played a really competitive match.”

Gavrilova, who has a Universal Tennis Rating of 12.52, is looking forward to more match play as the UTR Pro Tennis Series continues in Melbourne from Saturday.

“It’s nice to have competition going on during a pre-season, sometimes they can get a bit boring,” she said.

“Of course I could have played practice sets, but it is never the same. There’s different pressures – plus the prize money is good and it helps my UTR, so it’s a win-win.”

Kokkinakis capped a perfect return in his first competitive appearance since September 2019, winning his fourth straight-sets match in as many days.

“I thought I played my best match at the end of the week, which was good,” said Kokkinakis, who has a UTR of 15.03.

“My goal at the start of the week wasn’t even about winning. It was more so about just trying to get through these matches and keep the body in one piece.”

The 24-year-old was sidelined with glandular fever last summer and has spent the past few months rebuilding his fitness after being hospitalised and losing 14 kilograms with the energy-sapping illness.

“When you come back from injury, you can test on the practice court if you’re still feeling pain or good to go. But with glandular it’s tough, you have to really make sure you ease your way back into it,” Kokkinakis said.

“Maybe the COVID thing was a bit of a blessing in disguise timewise. Obviously it’s not a good thing at all, but for me it meant I didn’t have to rush back too early. I probably could have played a few tournaments earlier, but with my immune system and everything going on in the world I didn’t want to rush anything.

“But to play four matches in four days and feel pretty good, I’m happy with that.”

Felt good to be back competing for the first time in 14 months even for a smaller event. Health is 🔑🙏🏼