Australian comedian Ash Williams talks about his love of tennis in this week's Celebrity Match. 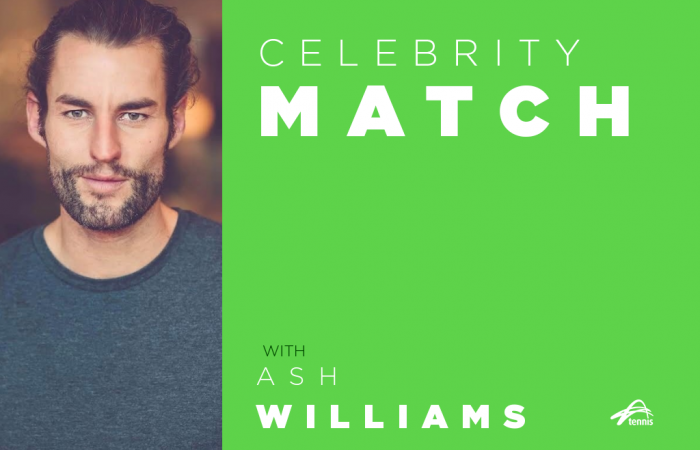 Ash Williams is an Australian comedian, actor and media personality. He hosts The Ash Williams Show, one of the most popular comedy podcasts in Australia. Williams has also recently combined his love of comedy and tennis, launching the Ash Tennis Podcast (ATP) last month.

In our Celebrity Match series, Williams reveals he once dreamed of becoming a professional tennis player …

I used to play junior tournaments around Australia up until the age of 16. I took it very seriously and wanted to become a pro. I got to about top 10 for my age in Australia. Sadly, no-one from my age group went on to big things.

Do you still play?

I do. I play three times a week now with a guy called Rick, who is in his 60s and is a retired tennis coach. He is very, very good and quick. I occasionally play with my brother too – even though Mum says we are not allowed to play anymore. It’s funny because when we do play, it is like we are 12 years old again. There’s always a tantrum and Mum has to try calm us down afterwards. I’m 38, but we still fight. Some things never change, I guess.

My backhand has always been my best shot. It is a shot that hasn’t changed too much over the years. We’ve seen the rise of the new Western forehands and I was actually taught by an older coach initially who used an Eastern grip, so that kind of stuffed my forehand up a bit. I had to change my technique as I got older. The backhand hasn’t changed that much. I come over it more, but the fundamentals are the same.

I loved the mentorship and the nurturing from tennis coaches. They can become real role models in themselves. I had a great tennis coach in Norm Meadows from Camberwell. He was instrumental in not only mine, but so many kids’ development into becoming fine men and women.

In terms of victories, I still remember a good win I had against a young kid named Alex Bucowicz. Every match I used to play, I’d write down who I played, the score and update the head-to-head record. I had a little black book – just not in the traditional sense. He was definitely No.1 in Victoria and might have been No.3 in Australia at the time. I beat him 3-6 7-6 7-6 and I was pumped. It was a great win. You know how some people move on from things? Well, I still haven’t moved on from beating Bucowicz when I was 14.

We played every day as kids. My coach said I could come down and join in the lessons every day, and my brother and I would be a hitting partner for whoever wanted to play. So from Monday to Friday I was at the tennis courts every day, then you’d have competition on either Saturday and/or Sunday. It gave me structure, and I liked the competitive nature of it all and the hope too. When you’re a young kid you’ve got hope of becoming like your idols, you want to try and live the dream.

Do you have a favourite professional match you’ve watched live?

There were so many, but one that stands out is when Mum got tickets for my brother and I to see Todd Martin and Pete Sampras in the 1994 Australian Open final. Sampras was my favourite player at the time, he’d just taken over Stefan Edberg in terms of my favourites. It was a pretty short match, he pumped Martin in straight sets. I still remember it though – Pete Sampras standing there in an Akubra hat holding the Norman Brookes Challenge Cup aloft. It’s a wonderful memory.

It has always been Stefan Edberg. I just loved how Edberg was the classic serve and volleyer. He was unrelenting at coming into the net. He’d even come in on flimsy forehands, but his net game was so good he could still win. He looked good too. I loved his t-shirts and I still think he’s the best looking and most stylish men’s player I’ve seen in my life.

Of current players, it’s a toss up between Roger Federer and Rafael Nadal. They are both great to watch, we are very lucky to have them both playing in this era. I’ll say Nadal, just because I’ve actually met him. I was doing some work for Channel 7 with the Australian Open broadcast when I got to interview Nadal. He was an absolute champ and so unassuming, humble and friendly. I remember asking him if I could kiss him and he didn’t answer. He’s very shy and gentleman-like, so I was quickly like “nah, I better not”. He didn’t know what to say!

If you could meet any player, who would it be?

It’s got to be Federer, just because I haven’t met him yet. For a past player, it would be Edberg for sure.

Do you have a favourite Australian player?

I don’t really have a favourite to be honest. I like Nick Kyrgios and John Millman and have interviewed both. I’m actually Twitter buddies with Kyrgios’ mother Nill. We message each other from time to time.

What inspired you to start your own tennis podcast?

I’ve thought about doing a tennis podcast for a while, but wanted it to be the right type. I recently got introduced to (co-host) David Zita, who is a journalist in Melbourne and is a tennis nut as well. We are very different too, so it’s a nice balance. It’s pretty light. We talk about the tour and hopefully give listeners a laugh as well. I just love talking about tennis, so it’s nice to be able to draw on all of my knowledge. As a fan you remember silly things. One episode we were talking about what type of clothes Michael Stich used to wear and we’ve also discussed some gossip I once got from Roger Federer’s nanny – apparently Federer is a terrible cook! It’s a pleasure to make and we’re looking forward to doing more in the lead-up to and during the Australian Open.

Tennis is fun because … you can play it your whole life, you can always try to get better and you’re always a chance to win.