In our Flashback Friday series, we look back at when Nick Kyrgios played Thanasi Kokkinakis in the Australian Open boys' singles final in 2013. 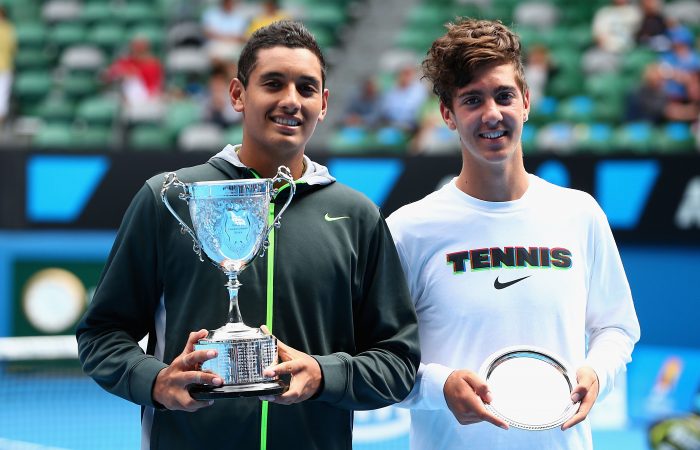 Kyrgios scored a 7-6(4) 6-3 victory against compatriot and doubles partner Thanasi Kokkinakis. It was the first all-Australian boys’ singles final played at Melbourne Park in 19 years.

It capped a brilliant tournament for Kyrgios, who also secured the world No.1 junior ranking during his run at Melbourne Park.

The final also marked a first match at Rod Laver Arena for both of the young Australians.

“I had a bit of a hit on it before my match. Obviously I was looking around a lot and just trying to think it’s the same dimensions of any other court I’ve played on,” Kyrgios said.

“It was obviously a great experience being out there knowing that (Roger) Federer and (Andy) Murray were grinding it out the night before.”

The 16-year-old Kokkinakis, a wildcard entrant, revealed after the match he was playing with a back stress fracture.

“I was pretty shattered to be honest,” said Kokkinakis, who had three set points in the opening set.

“I thought I was going to pull out, which isn’t the right mindset going into a final. But the doctor said it couldn’t really get much worse. I did a bit better than I thought I would. I didn’t think I would make it through a set.”

Kokkinakis refused to use his injury as an excuse.

“He was too good,” he said of Kyrgios. “To beat a player like Nick, it’s hard enough when you’re 100 per cent healthy.”

Kokkinakis also reached the US Open boys’ singles final in 2013, where he lost to Croatian Borna Coric in three sets.

A year later, at Australian Open 2014, both Kyrgios and Kokkinakis advanced to the second round of the men’s singles draw as wildcards.