Chef and television personality Reece Hignell shares his love of tennis in our Celebrity Match series. 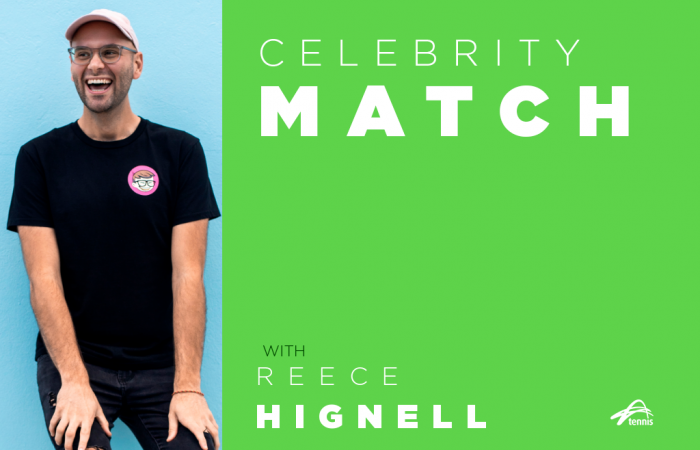 Reece Hignell is a fan-favourite MasterChef Australia contestant. The 30-year-old has twice competed in the television cooking competition – finishing sixth in 2018 and earlier this year, placing fifth in the ‘Back to win’ edition. He now runs Cakeboi in Newcastle, baking cakes for weddings, engagements, birthdays and other special events.

In our Celebrity Match series, Hignell reveals he loves tennis just as much as baking …

Tennis is one of my top passions in life – whether it’s playing (socially, of course) or spectating. I play at least twice a week with a few different friends, but mainly with a friend named Dubzy (her nickname given for her commitment as my doubles partner). I am a member of the Mayfield Tennis Club in Newcastle and also play in a doubles competition at District Park Tennis Club on Monday nights. When I was filming Masterchef, I would always get my fellow contestants to play tennis with me on our break days.

I honestly feel that my cross-court forehand is probably my best and most consistent shot, however the joy of hitting a passing shot is my favourite part of the game. I love a target!

Similar to my cooking, my tennis inspiration came from my Nan. She would sit us at the club when we were toddlers and we would watch her hit with friends. It is funny that my Nan is my first inspiration for both my major passions in life – baking and tennis.

I have so many enjoyable tennis memories of sitting in front of the TV as a young spectator watching the Aussies. My family were massive Pat Rafter supporters and we would stay up at night to watch him play at Wimbledon. Possibly my favourite specific tennis memory was watching the Australian Open 2005 quarterfinal between Lleyton Hewitt and David Nalbandian. That fifth set (which Hewitt won 10-8) still lives on in my memory! I also loved watching Sam Stosur win the US Open and Ash Barty’s French Open victory last year. I have too many great memories to choose just one!

Here in Newcastle, it is hard to get to the tennis as you have to travel. However, I have made it to the Australian Open a couple of times and I do like to show off about who I chose as my first ever match to watch live. It was Ash Barty’s return match at Australian Open 2017. I wanted to watch her play as I’d loved following her at the Hopman Cup a few years earlier. I like to say now that I predicted Ash’s run to Grand Slam glory and that No.1 position!

My all-time favourite No.1 favourite is the mighty, queen Serena Williams. She first captivated me with her 2007 run to the Australian Open title out of nowhere. From that win on, I have been captivated by her power, court intelligence and determination. There is a reason she is the best of all time.

How can you name just one? Serena would be in my the top spot, but also, there is Roger Federer, Rafael Nadal, Nick Kyrgios, Ash Barty, Simona Halep, Naomi Osaka, Daniil Medvedev, Kim Clijsters, Lleyton Hewitt … oh gosh. Picking one is really hard! But let’s go with Serena – because of her mighty accomplishments and also because we have the same birthday.

The best part of the Australian Open is … the addictive atmosphere. Tennis, food and beverage providers and live entertainment all combined into this annual super event.

Tennis is fun because … it’s interactive, inclusive and adaptable. The greats have shown us that anyone can play – just pick up a racquet!