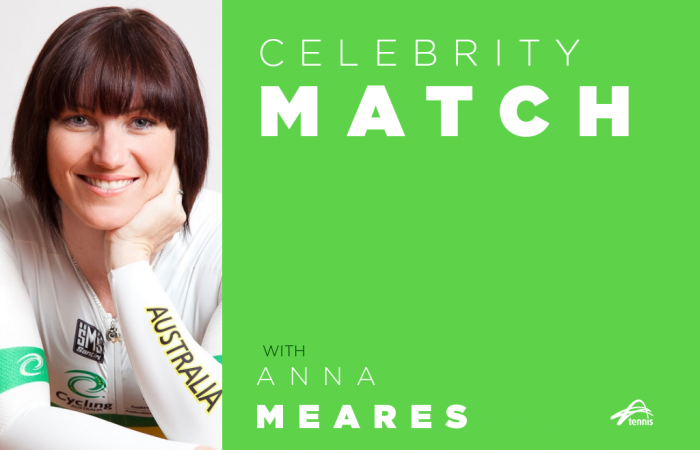 Anna Meares is the world’s most decorated track cyclist. Meares is a four-time Olympian and was Australia’s flag-bearer at the Rio 2016 opening ceremony. Winning six Olympic medals (two gold, one silver and three bronze) in total, she became the first Australian athlete to win an Olympic medal in an individual event at four consecutive games. Courageously, she competed at the 2008 Olympic Games eight months after fracturing her neck in a track accident. Meares also won 11 world championship titles and five Commonwealth Games gold medals in her stellar career. The now-retired 37-year-old became a mother earlier this year and released her autobiography, Now: Sometimes the end of the race is only the beginning.

In our Celebrity Match series, Meares reveals she grew up playing tennis …

I played tennis for fun with friends as a young kid. I remember playing a singles and doubles tournament when I lived in Middlemount in Queensland. I won a trophy … but there were only four competitors!

The forehand is my best shot for sure! That’s where most of my power comes into play. I can’t serve to save myself, so I do the old ‘tap it in’ shot. My backhand can – and does – go anywhere. It has a mind of its own! So my forehand is by far the best and being a power strength-based athlete, it can be a real weapon. However when I get tired, things go haywire quick. It often ends up in the net or even over the exterior fence.

I remember being bored one day with my sister and friends, so we got our tennis racquets out and played across the road in Middlemount. The net was invisible and bonus points counted if you could get the ball over the power lines and still land in play. It was a very small town with hardly any traffic. We had players, a umpire and two traffic spotters keeping an eye out for cars. We would rotate positions so everyone had a turn at each position.

Do you remember your visit to the Australian Open?

I’ve never been to the Australian Open – but it is on my bucket list to experience!

I’d have to say Rafael Nadal. I love a battler and a fighter – he definitely shows this on court! I immensely respect Roger Federer too, and the work each do off the court.

Ash Barty. I think she is a gem of a human being and as real as they come.

The best part of the Australian Open is … accessibility to the world’s best and the show that encompasses the game.

Tennis is fun because … you don’t have to be good to still have fun with friends. Bad or exceptional at the game, it’s fun to watch and play.