In our Flashback Friday series, we celebrate the Australian Davis Cup team's sensational come-from-behind victory in the 2015 quarterfinals. 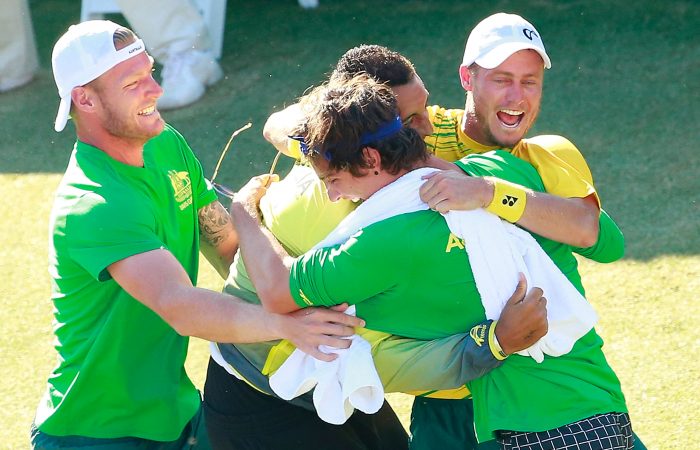 Lleyton Hewitt and Sam Groth played a starring role as Australia staged a stunning comeback in the Davis Cup quarterfinals in 2015.

Hosting Kazakhstan on a grass court in Darwin, the Australian team trailed after opening day losses to Nick Kyrgios and Thanasi Kokkinakis.

But for only the second time in history (and the first time in 76 years), the Australian Davis Cup recovered from a 0-2 deficit to record a sensational victory.

Hewitt and Groth combined to clinch the doubles rubber, then returned for the reverse singles.

The No.68-ranked Groth scored a four-set victory over No.63-ranked Mikhail Kukushkin to level the tie.

“That was amazing. To win a match, a live rubber for Australia, with the crowd going crazy and to give Rusty the chance to get us over the line in a World Group quarterfinal it is pretty hard to explain and to put into words, actually,” Groth said afterwards.

Hewitt, who was ranked No.279 in singles at the time, stepped up in the final singles rubber. He scored a straight-sets win against world No.115 Aleksandr Nedovyesov.

It marked the first time in Hewitt’s 17-year Davis Cup career that he had played in a deciding fifth rubber.

“I love the backs to the wall situation and we had to rally together to get the win,” Hewitt related after recording the 42nd and final Davis Cup singles win of his career.

“You don’t get opportunities like this very often. This is what dreams are made of.”

The thrilling victory propelled Australia into the Davis Cup semifinals for the first time since 2006.

> Hewitt is nominated for induction into the International Tennis Hall of Fame in 2021. Show your support and vote now to help his chances.