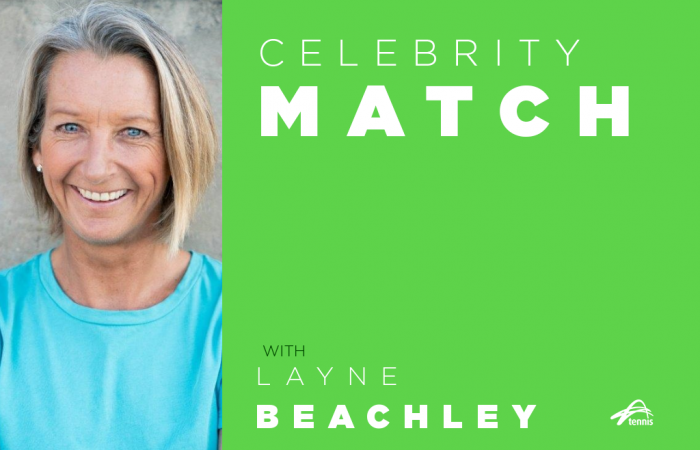 Layne Beachley is an Australian surfing champion. She is the only surfer in history – male or female – to win six consecutive world titles, doing so between 1998 and 2003. After finishing her stellar career with seven world titles, Beachley was inducted into the Sport Australia Hall of Fame in 2011. She is now a motivational speaker and runs her own foundation Aim For The Stars, which aims to empower females to invest in their future, fulfill their potential and put back into the community that supported them on their journey. Beachley has also just launched the Awake Academy by Layne Beachley, an online course to empower others to own their truth.

In our Celebrity Match series, Beachley reveals she has a life-long love for tennis …

Tell us about your tennis experience. Have you played much?

I played a lot as a kid, but I ended up choosing surfing over tennis. I always considered myself to be a good tennis player – until I had my first hit with Sam Stosur, then I realised I had a lot to learn! The first time I hit with Sam was actually on the clay at Roland Garros, so it was a very cool experience.

How often do you play tennis now?

Not very often, maybe four times a year for a social hit. But honestly when I do get on the court, it is just like riding a bike. It feels like no time has passed. Playing tennis is one of those innate skills that I cherish, even if I don’t use them enough.

What is your best shot?

I would say my cross-court forehand and my inside-out serve to the backhand.

Playing as a kid with my brother, I probably would have been about six years old. We used to love playing in the backyard.

Teaching Martina Navratilova how to surf. She came to Manly and wanted to learn how to surf, so I put my hand up to help. She was one of my tennis heroes as a kid. I taught her how to surf in some pretty ordinary waves and she signed me an autograph saying “next time it is tennis, because that will be payback”. I haven’t had a chance to have a hit with her yet though!

Do you remember the first professional tennis match you ever saw live?

I used to come down to the Australian Open in the ’90s. I was one of those punters who bought tickets to sit in the stands all day and night watching tennis. I can’t remember exactly who was playing in the first match I saw, which probably was on one of the outside courts in 1994 or 1995.

What is the most memorable tennis match you’ve ever seen live?

I remember watching Pat Rafter play Andre Agassi in the Australian Open 2001 semifinals. The match took forever! Pat lost in five sets, but with his tenacity and fighting spirit it was a pretty extraordinary performance. He dug deep and really showed his competitive doggedness.

Billie Jean King. I’d love to thank her for breaking down the barriers, standing up and fighting for what she believed in, and showing the world that women are just as capable as men – especially when they are given the opportunity.

Throughout your sporting career, you must have crossed paths with many tennis players. What are some of the most memorable experiences you have had?

I’ve had some really random ones! I met Nick Kyrgios at the Sport Australia Hall of Fame awards and I actually thought he was Dante Exum (an Australian basketballer who plays for the Cleveland Cavaliers). I made a complete idiot of myself in that encounter. I didn’t own up to the fact that I thought he was someone else, but after standing there talking for a couple of minutes I quickly realised who he actually was and carried on the conversation. Nick was respectful, but I imagine he walked away thinking ‘who the hell was that idiot!’ I once met Rafael Nadal on the red carpet at the Laureus World Sport Awards too, but he was more interested in (fellow Australian surfer) Stephanie Gilmore than me.

Who are some of your favourite Australian tennis players?

I’m a fan of some of the older guys. Wally Masur lives in my area in Manly so I see him a bit and he is a lovely guy. I was taught how to serve properly by Mark Edmondson and Rochey (Tony Roche) has helped me with my ground strokes. I’ve played in a celebrity charity tournament in Noosa with Sandon Stolle, where we lost the final thanks to my poor volleying. We lost to Shannon Noll too, which I was devastated about. John Alexander is another great guy, he was the one who helped me get tickets to the French Open and organise the hit with Sam Stosur.

The best part of the Australian Open is … that Rod Laver Arena is so intimate, wherever you sit you feel like you are right on top of the action. The VIP treatment is great too, I love that!

Tennis is fun because … it’s social, a great way to be physically active and it is also challenging, but rewarding.